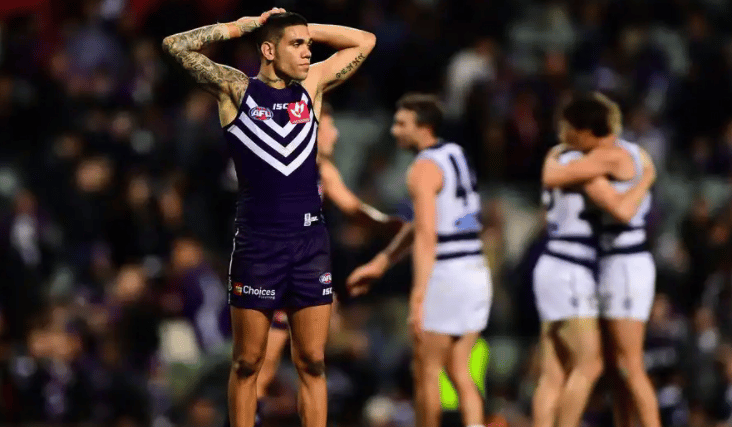 For decades, the AFL has considered WA a last resort. A place where their circle-jerk network of Victorian dick heads felt unwelcome. Felt unseen.

Nevertheless, every now and then WA gets a tap on the shoulder and told it gets a Thursday night game. Sometimes a Friday night game.

Although mostly, the state that has kept this god damn nation out of recession is delegated to the Sunday slot. Often the last game.

This is like being the last man in a voluminous bukkakaroo and thinking dropping your load is going to make ripples through a population that is saturated in the off-putting, creamy Sunday blues.

They are gripping their pillows and yearning for the sweet release of the next life rather than face up to work for another Monday.

Dockers following suit from the Eagles on Monday put up the kinda fight that made the Australian assault in the great Emu war of 1932 look effective.

AFL officials were seen violently spoofing into their suits at the result. They finally had a reason to deny WA a fair go on the broadcasting schedule.

Eddie Maguire was said to have entered into a trance like state that could only be compared to a peyote trip. Billy Brownless finally forgave Gary Lyon.

It seemed the Dockers’ effort had healed the frayed fabric of the Victorian psyche. After all, it’s not the AFL it’s the VFL in the hearts & minds of anyone actually involved in scheduling.