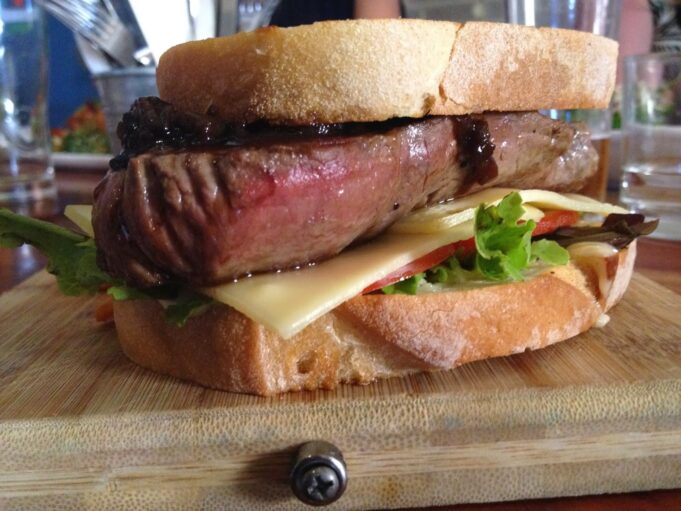 Legend has it that the steak sandwich was invented as a way for publicans to repurpose the rump cuts from meat trays that never made it home because the winner passed out in a puddle of his own piss.

For generations, Aussies loved nothing more than asserting their carnivore dominance by gnawing on a chewy piece of shit-steak wedged between two slices of bread that were dryer than a stoner’s mouth during 5th degree cottonmouth.

It’s especially popular with people who consider their ability to digest and enjoy meat to be integral to their masculinity. Just saying the word “steak” means they are giving 110% to the boys and the footy club.

Over time, the sandwich evolved somewhat but given the penchant for using cheap, dogshit cuts of steak, the hero of the dish was always as tender as a Jackaroo’s ballsack after 30 years of barebacking in the hot Aussie sun.

A key problem with the steak sanga was that the chewy steak was often not cut into slices. This would mean that the first bite of the sanga would result in it tearing apart like Clive Palmer’s trousers after he spotted a frivolous lawsuit on the floor.

It’s hard to imagine why anyone would buy a one way ticket to dry town when the inviting, juicy gape of the burger was enticing you on the same menu. Especially as steak with pepper sauce and chips shines brighter than any star in the milky way.

It’s also suspicious that you’ve never seen anyone add relish to their steak unless it’s in a sanga format. Sauce’s chunky cousin – a condiment that will leak out of the decimated sanga and leave you stickier than Winneh the Pooh’s itchy arsehole.

Over time, pub kitchens were largely taken over by trained chefs. This lead to the renaissance of steak sangas. Finally, cuts a dingo would pass up were discarded for decent steak and proper technique.

Suddenly, the steak fillings didn’t look like they were accused of witchcraft in the 1600s. They were also sliced to ensure each bite didn’t cause catastrophic damage to the sandwich. However, was it a matter of too little too late?

By this stage, Australia had taken yet another leap towards its Americanisation and proper burgers were beginning to pop up. These weren’t the beetroot & unmelted Bega cheese boomer burgers from yesteryear. They were grease bombs ready to detonate early onset cardiovascular disease into your pie hole.

However, the steak sanga lobby was powerful. Commissioning an annual competition despite almost any other pub grub being a more deserving meal to be put to the test. This probably is due to older generations resistance to change.

It remains to be seen whether the gentrification of the steak sanga will secure its survival. It would appear its main supporter base would like to see it go back to toasted sliced bread and a steak loaded with gristle. A taste of the depression era. How a real battler eats.