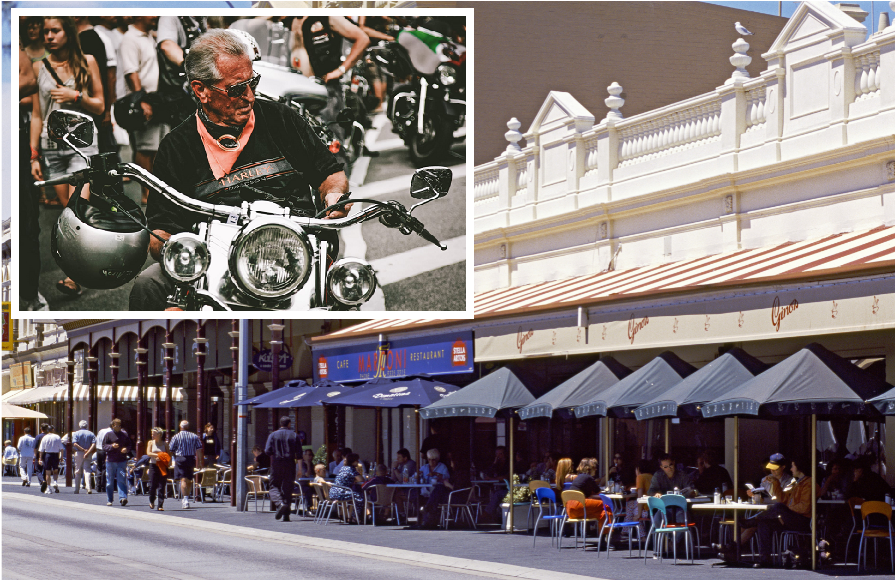 Lou knows when the female population of Perth gazes upon his newly purchased hog there is a 50:50 chance they’ll think he’s either suffering a debilitating mid-life crisis or he’s a bad boy.

And today, Lou likes those odds. As per tradition, public holidays are when Lou squeezes into his riding leathers, fires up his Harley, and creates a powerful poon-ami that floods every undergarment within a 5km radius.

“Only real riders know the feeling, mate. My ex-wife said I looked like a village person but we all know I look like the village chief. I call my bike the magnet, wanna guess why?”

As enjoyable as a little guessing game would have been, his vigorous polishing of his exhaust pipe was becoming too offputting. He continued unprompted,

“Best thing I ever did was buy a Harley. How many nights a week do you reckon I’m alone in my waterbed now? Yeah, that’s right. Fending them off with a stick mate”

Upon further investigation, we learned that this was a half-truth. Yes, his waterbed was rocking to the panicked rhythm of his crankshaft most nights but this was mostly given his penchant for ripping through the classifieds and “spending his kid’s inheritance“.

Hours after speaking to Lou we discovered that he had caused some serious motion in the ocean-side city of Freo. A young group of girls who had met for a coffee at Gino’s said they felt his presence well before being disgusted by his leer eyes.

Kaila, 19, who is enrolled at Notre Dame told us,

“Ew, this gross group of older men started revving their bikes as they turned onto South Terrace. It was so loud. We couldn’t hear each other speak. Then he must’ve mistaken my disgust for interest as he lowered his Ray-Bans and gave me a wink before revving again. I think I’m off men for life”

Similar scenes occurred some 20 minutes later when Lou and his riding group were standing next to their Harleys and sipping coffees.

Tamara, 23, was taking her grandmother to the Freo Markets when she walked past Lou. She told us,

“Despite being closer to my nan’s age he flicked me a little nod. In his mind, he was that man your mum warned you about but in reality, he came off like that man the police warn you about. It wasn’t going to happen”

After spending 3 hours standing next to his bike in various locations around Freo, Lou took the show on the road again. This time destroying eardrums on Challenger Parade and rolling up next to P Platers and giving them left, right we’re gonna have a goodnight helmet adjustment.

We regretfully report that Lou didn’t cop any roots today despite his claims.