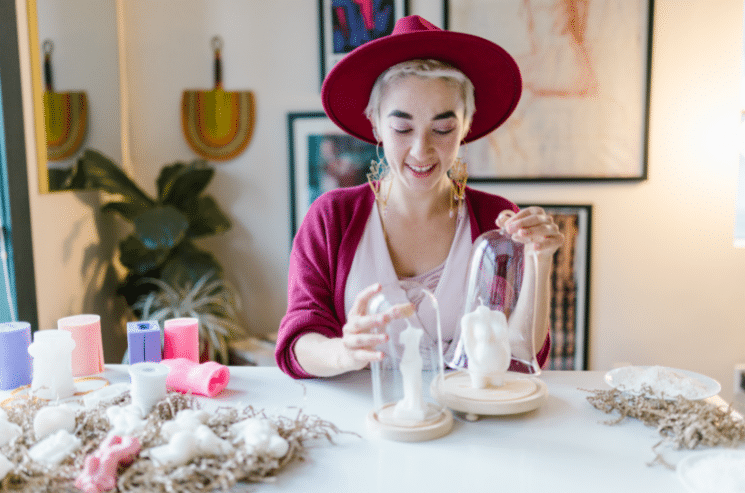 When it comes to hobbies, Kylie has a degree in Giveupology. First, she gave up hiking after an unfortunate bull ant incident in Kalamunda. Then her sourdough game went to shit and now her veggie patch is looking so sad that her earth has tried to salt itself.

There is no doubt that while Kylie jumps into new hobbies with vigor & gusto she has serious commitment issues when it comes to getting past the first hurdle. That’s all set to change with the enrollment in an arts & crafts class this weekend.

While her partner attempts to unsuccessfully pull the perfect pork for the 43rd weekend in a row, Kylie is heading to a macrame class today with the girls. Her plan is simple, master the craft and create her own hangers for her soon-to-be-dead houseplants.

On Sunday, Kylie and her sister will tackle a hobby workshop that may or may not be an excuse to smash brunch champers & devour grazing boards while painting a little plate that you’ll end up gifting to someone instead of a present they actually want.

Kylie spoke to The Bell Tower Times about her newfound passion,

“I really feel like arts & crafts is my calling. I watched that show on Channel 10 and I thought, how hard can that kinda thing be? I’m already thinking of setting up an Instagram for my macrame hangers, a real side hustle, ya know?”

Ah yes, a familiar attitude. Her sister remembers when she turned into a waxed Costa Georgiadis after spending hundreds of dollars on a veggie patch last spring. Only to yield a crop that would make a Chernoyble medley of radiated greens seem like an appetising feed.

Her sister told us,

“Between you and me, I think Kylie is really hoping this new folly will fill the gaping void in her mid-30’s existence. I’m just glad her kombucha stage is over, if I had to pretend to enjoy her rancid offerings one more time, I think I would’ve lost it”

It appeared Kylie was more interested in profiteering off her hobby than pursuing it for enjoyment. Claiming that setting up an Instagram account for “Kylie’s Macrame” wasn’t jumping the gun but rather an “insurance policy” against failure,

“It will be hard to give up on a hobby if it’s the start of my arts & crafts empire. Say goodbye to legal assistant work and say hello to my own Netflix show hehe”

Settle down, Kylie this is your home decorating stage all over again.