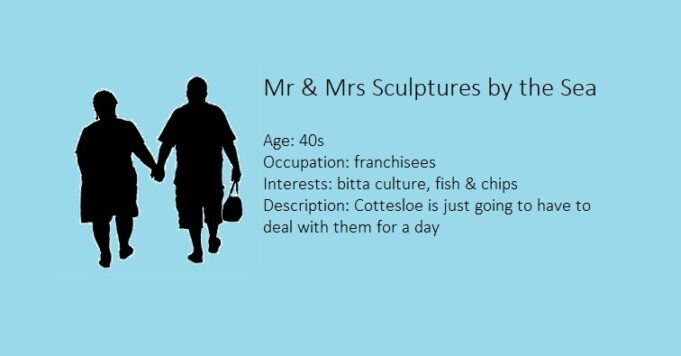 Big Dave and Sharisa love Sculptures by the Sea. Where else can they get some culture “up em” while stuffing their faces with crabsticks and not being shackled by a requirement to cover your hooves?

To avoid some of the “issues” from last year, young Keyf & Kutalee are told they have to share a 500ml Monster energy can for breakfast this time.

Dig Dave is loathed to enforce a modicum of parental control because personally, he found it funny when Keyf sharted in the Cottesloe General Store and almost caused a boomer to slip over.

Slightly less full of beans, they arrive in Cottesloe and look for a spot to park up the AU station wagon. They almost give a Gant-clad silver spooner a heart attack when Big Dave’s chariot backfires after pulling into his driveway to chuck a u-ey.

After 15mins, Big Dave can no longer be farked and decides to drop anchor on some rich kent’s lawn. It’s only a short 3-minute walk to the sculptures and most importantly – it’s free.

Once at the exhibit, Sharisa sets the kids loose. Run free little boganlings – mummy and daddy need to take some photos for Facebook. They proceed to loudly share their thoughts on why each piece of artwork is a giant pile of steaming shit.

Sharisa can tell Big Dave is getting a bit agitated. She rubs her man’s hairy back, “what’s wrong, luv?” Big Dave can’t hold in his disappointment any longer, “where’s the big goon bag? Surely they didn’t dog us again?”

They did. Big Dave grapples with the cruel reality of an ever-changing artistic plane while pacing angrily on the sand. Suddenly, a commotion is heard nearby. It seems their little angels have once again damaged an artwork by climbing all over it.

Sharisa threatens to drag the next hero by the hair who dares tells her kids to get off the sculpture and behave. She screams, “they should’ve known kids would be coming! Make the art stronger then!”

Big Dave diffuses the tension by pulling his family away with greasy promises of battered delights. It’s, without doubt, his favourite part of the circus and they make their way to the nearest fish & chip shop.

He briefly contemplates jumping the counter over taking offence to their definition of a large chip but exercises a rare moment of self-control. Anyway, he’s not going to sit in the paddy wagon while his corn jack gets cold, again.

They get stuck into the feed and crack a coupla couplas from Big Dave’s esky bag. It would almost be a touching moment if Big Dave could stop ranting about the fact he probably pays more tax than all these rich carnts combined.

After dinner, they make their way back to the car to see a big dirty parking ticket stuck to his window. Sharisa knows this is bad when Big Dave barely reacts and mutters, “dog act, dog act, anyway everybody in”. Is this a new man?

Well, no, it seems Big Dave had internalised his rage on this occasion as is evidenced by him crawling the street of Cottesloe for an hour and 45 minutes looking for the parking inspector. “Just going to have a chat with him, luv, just a nice little chat”.

There he is. That’s the Big Dave we all love.