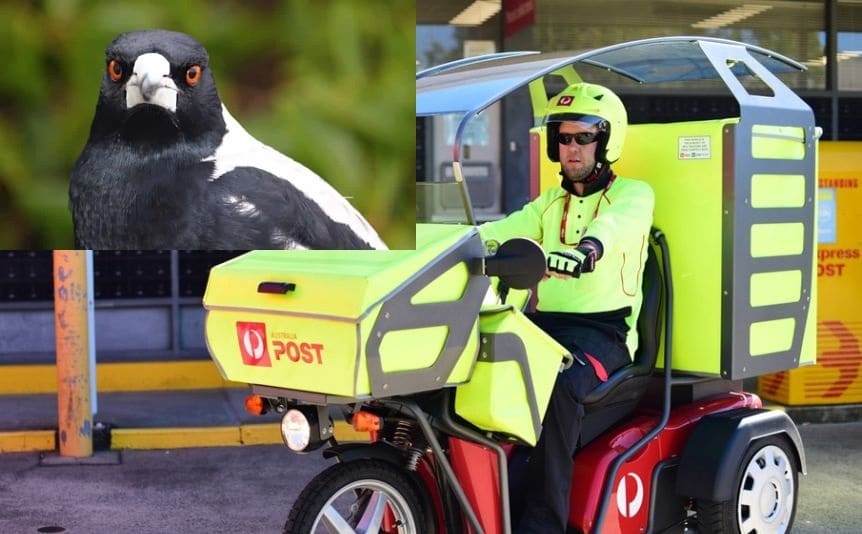 For the last couple of years, postie Brad has shared an uneasy understanding with a local magpie, Merve – he tries to deliver mail, and Merve swoops the shit out of him to defend his family’s honour. Simple.

The yearly battle royale has even traversed a generation with Brad’s ex-postie father copping the fury of what is believed to be Merve’s father some 10 years ago.

Brad’s father would often tell everyone at the front bar that the best part of his day was when saw that beautiful winged beast dive-bombing him through his motorbike’s mirrors.

“Delivering mail just wouldn’t have been the same without the intensity and adrenaline I’d get trying to dodge this frenzied father. Some days he’d win, some days I’d win but there was a respect there, I think”

You can imagine Merve’s shock when he learned that his ancient enemy has stepped up his hardware and is rolling in a swoop-proof tank these days.

Australia Post has rolled up the e-Trike that is designed to offer more storage space for parcels but also protect a good ol fashioned swooping. They also make less noise, which is thought to aggravate the birds less.

How wrong they were in the case of Merve. Witnesses say the proud father of 3 chicks can be heard warbling at all hours of the day. It is believed the tone of the warbling is sending a clear message,

“get back on your motorbike and face me like a man, you coward”.

Further warbles and menacing side-eyes are thought to be communication the following sentiment:

“You can hide in your little weird thingo all you like, Brad, I’ll get you, I always get you”

True to his warbling, Merve has “gone” Brad every time his dorky little goober-mobile has rolled through his territory. Copping a beak full of protective screen in the process many times.

Brad confirms, “yeah he still wants a slice, he’s learning how to curve into the open spaces on the sides. He’s a craft little bugger but as my dad said, Merve’s a better father and I’ll ever be, so I allow it”