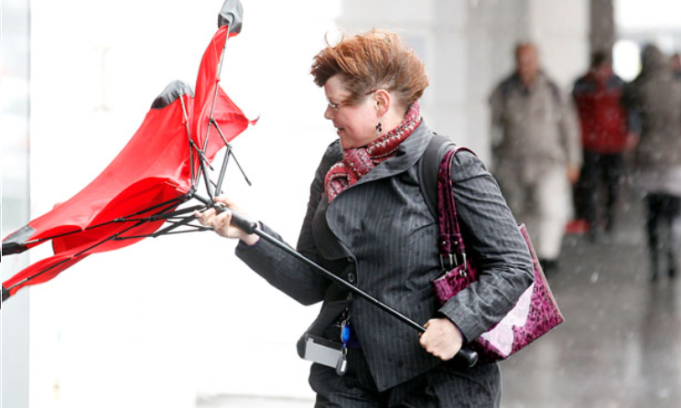 Rene is known as a beast in the mediation room but a complete baked potato when it comes to managing expectations on Perth’s premier wind tunnel: St Georges Terrace.

Having just attended a conference, Rene was buzzing on the raw, unadulterated rush you get from passing business cards, making chit chat with tools and sipping on single serve packet coffee under the artificial glow of bright halogen lights.

Some say this combination is like pure smack to the vein of a seasoned lawyer. Others describe it as attending your own funeral when you weren’t even invited.

For whatever season, Rene stepped out into the real world with a deluded optimism. A dangerous emotion when you are armed with a brand spankin’ corporate brolly that has the structural integrity of 1 ply toilet paper against the leaky arse of Perth’s wind today.

After copping a light sprinkle from the “cold front to end all cold fronts”, Rene decided to use her new corporate gift. She dug past the stress ball and stale mints to find her Excalibur.

She believed this weapon was uniquely bonded to her and she opened it with gusto. To her surprise it held… for about 0.5 seconds before a big gust ripped down the terrace and turned her new umbrella into a prolapsed arsehole.

Fabric meat was ripped straight form the wire bone. It was inverted. She was battling to calm the savage beast as a bitta rain pelted her face leaving her looking like Mr Ratatouille after chef decided he needed to cut costs on his soup’s protein.

Onlooking, Simon, told The Bell Tower Times, “what the fark was she thinking? Even on a calm day down the Terrace could blow the red dirt off a FIFO’s boots, dreaming mate, especially with that cheap piece of shit?”

And cheap it was. It appears the sponsors of the conference spared every expense when it came to sourcing their corporate merchandise. In their defence, they never thought someone would actually put the item to the ultimate test.