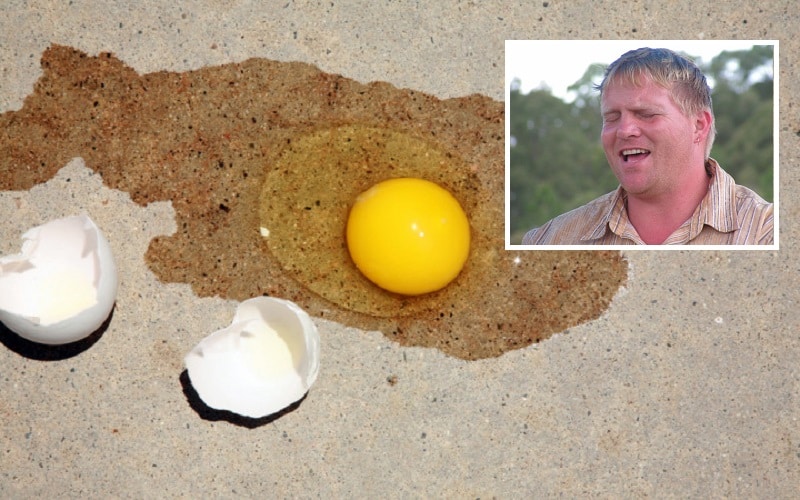 Despite temperatures sweltering to above 50 degrees in some parts of the Pilbara, Kenny has sensationally refused to admit he’s hot until such time as his egg has finished cooking on the footpath.

Kenny heard the hype and immediately got to work cooking up a feed at around 10 am this morning. He told The Bell Tower Times,

“All these big girl’s blouses whinging about the heat need to get a reality check, cob. Me bloody breakfast isn’t even done cooking!”

Evidently, the only thermometer that Kenny recognises in the Pilbara is the infallible science between the surface temperature on the footpath and the bacon & egg roll he’s been fangin’ for since he woke up. He continued,

“They say it has broken records or whatever but cobber, let me ask you this… do you trust a record or do you trust your gut? Reckon you’d have a go on that egg as it is? Farkkk no you wouldn’t, it’s still cluckin”

Kenny was correct, the half cooked egg has been sitting there for about 20 minutes and is disturbingly close to a bushies blow that Kenny unleashed seconds earlier.

As the morning rolled into the afternoon, Kenny was finally happy to admit that it was “pretty warm”. When he decided that the egg outside his house was about ready.

He ushered us over to his HiLux where he’d been cooking a couple of slices of bacon on the bonnet,

“Here have a go at that, I’ve got a lamb cooking in the front seat too. Gets a bit hotter up here than you Southern pusssies are used to, ay. Go on, have a bite of that roll, a Pilbara delicacy, mate”

It was clear that biting into the 4-hour egg & bacon sandwich was a bonding moment between us. Kenny was finally able to let his guard down.

“Don’t wanna sound like a softcock or nothing but fark me it’s a scorcher today, ay? Wish I was chilling in the air con not standing out on the street waiting for these damn eggs to cook but the misso is hungry and you know what they say, happy woife, happy loife, cob”

At that moment his majestic Pilbara Princess burst out with a cake tin asking if he could preset the Hilux to 200 degrees.