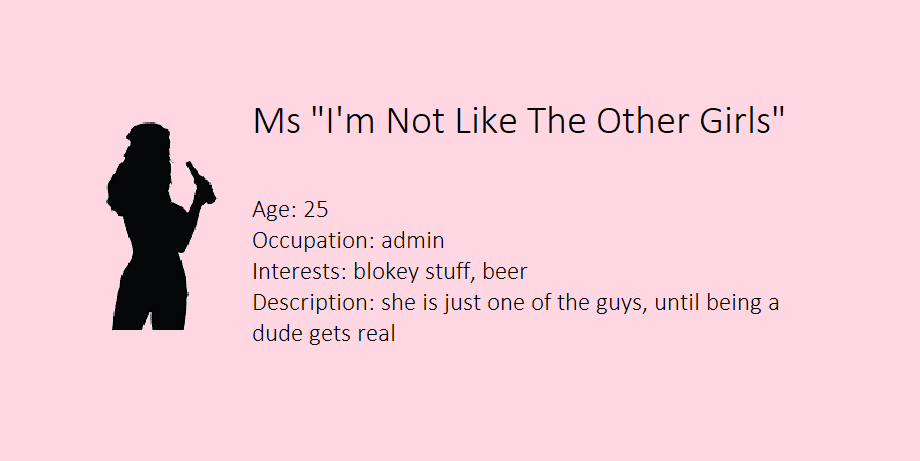 Anna just doesn’t see Kookai to eye with other girls. For most of her life, she has repelled women like a waft of Lynx Africa on a nightclub dancefloor. If you ask her why she’ll tell you – she’s just not like the other girls.

Anna prefers the company of blokes. She refers to the men in her inner circle as “brothers”; which takes on a distinctly Bunbury feel given at least 3 have descended so deep into the cavernous terrain of the friend zone they could form a Thai football team.

Of course, Anna knows it’s dark down in the cave, so she keeps their hopes alive with constant flashes of flirtation. After all, male attention is the oxygen that lets her self-esteem burn so bright.

She hangs out with boys because she hates drama, and what better way to prove you hate drama than making any girl who comes near her “brothers” feel as welcome as a Christian missionary on a remote Indian island.

To really cement her status as one of the guys, she invites herself on a lads trip Down South.

She uploads a photo of her ute tray filled with surfboards and tinnies, “no espresso martinis & shopping for this girl #lovebeer#oneoftheguys#guyinagirlsbody#notladylike#ytb”.

After the first night, the cracks start to show. She knew boys can be messy, but she underestimated just how quickly things would descend down the filth axis.

If she’s being honest, the house smells like a Proctologist’s consultation room after a badly timed sneezing fit.

Determined to prove she’s one of the boys she soldiers through several more hours of disgusting banter.

That’s until when the boys decide it’s time to live their best lives and watch videos that the dark web would want to reject.

She has had enough and needs some space. She decides to pull a classic female play and hide out in the bathroom.

Unfortunately, she walks in and is confronted with the aftermath of R Kelly’s sex tape. She storms out, “THERE IS PISS ALL OVER THE TOILET!”

One of her “brothers” looks up from the weird smut session, “chill out, just use the piss-mop, it’s next to the bowl”.

She suffers instant PTSD, a piss-mop? She screams and decides to spend the rest of the night in her ute.

In the morning, she defiantly peels the Jet Pilot sticker off the back of her ute and drives home sobbing.

Being one of the boys has its limits, and now she needs to eat a tub of Ben & Jerry’s in a cute summer dress to try to claw back some of her feminine soul.