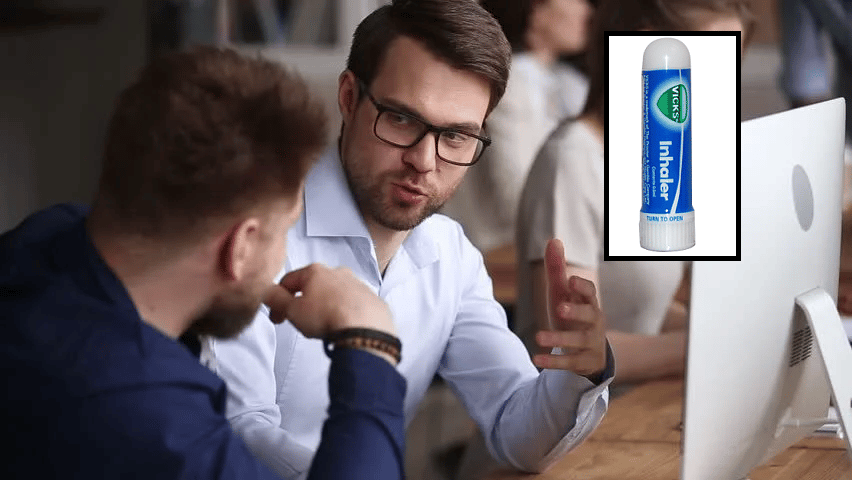 A blast of nostalgia almost knocked a couple of 30-somethings off their feet today when a snuffling coworker whipped out a Vicks Inhaler to help tackle the disgusting noises emanating from their congested, bloated face.

Upon seeing it enter the nostril and the robust inhale that followed, the two millennials locked eyes and gave each other a knowing smile. They knew what time it was.

The older snuffaluffagus was left confused by the two staring at him try to clear his nose. He told The Times,

“They had this weird look in their eyes. Almost like watching me inhale my Vicks was a bittersweet moment for them. Like being reminded of a feeling you know you’ll never feel again. I thought, piss off ya clowns, you better not be getting off over this”

Alex was first to spot the inhaler and instantly knew Trent probably could relate. He told The Times,

“I heard Trent mention Breakfest a couple of years ago so as soon as I saw that Vicks come out and he was in the vicinity I chanced it and gave him a cheeky smile. He sent one right back”

Discretion was key as the two were careful not to reveal their sordid pasts. Trend told The Times,

“Yeah, it was a real bonding moment. We finally cracked through the barrier of ice between coworkers. I shuffled up to him later in the kitchenette and said the hayfever at DnB gigs used to be bad, ay. He got it, oh he fkn got it”

Sadly, both men returned to their desks and got lost in an existential yearn-fest thinking about the days there were wild and free.

Trend reflecting on the chance encounter told The Times,

“Sometimes you’re just not ready to be slapped in the face with a memory of when you were young and beautiful. Reminded me that the only joy I got from today was cramming two roast meat sandwiches down my face at lunch. It was pretty sik though, not complaining”