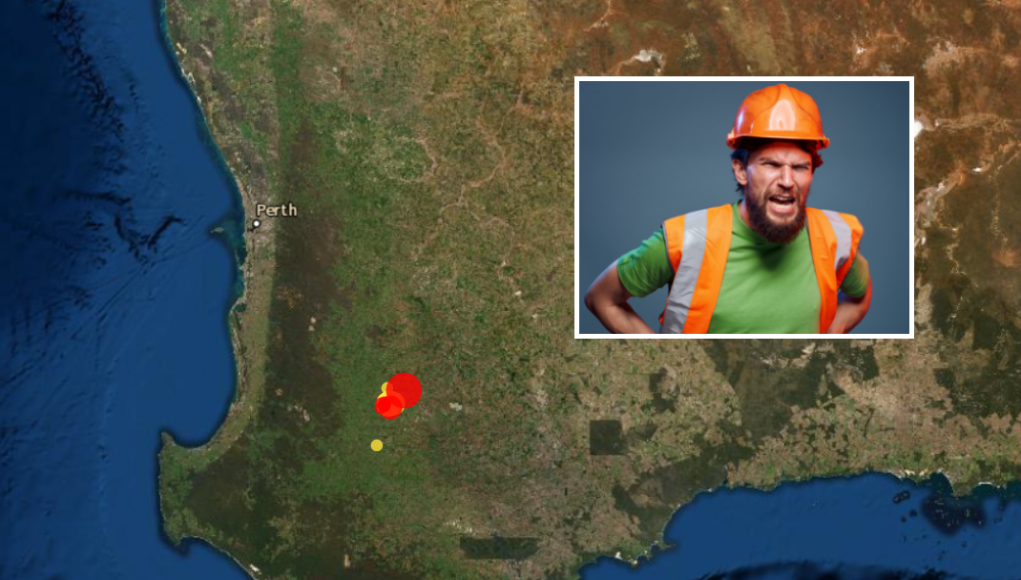 Dan almost threw his Jandal at the telly when he heard a report that a 4.7 magnitude earthquake had rocked some woolen socks out near Wagin.

A neighbour living next to Dan reported feeling significant shockwaves of Dan’s ranting through their communal wall. He told The Bell Tower Times,

“I could feel the strong vibrations through the floor! Dan was going off like a shepherd’s cock on shearing day. North Island this, weak as puss that. Old mate wasn’t happy”

We understand that Dan was 30 minutes late for work this morning on account of Facebook-arguing with some Aussie FIFO mates who claim to have felt the rumble in Perth.

Storming onto site in a huff, one of Dan’s coworkers attempted to say good morning to the big man, getting a very blunt reply. We were told,

“Yeah, I said g’day to the big feller and he just grabbed me by the shoulders and told me that a 4.7 magnitude earthquake was nothing and that it wouldn’t even be tools down back home scaffolding with my sister’s boyfriend Tane”

The situation failed to de-escalate when Dan walked straight into a huddle of coworkers talking about how they were woken up by the earthquake in their metro homes.

“I’ve sent bigger shocks through my house from my arse after a night on the Zinger boxes you Aussie deckheads. Are you seriously calling a 4.7 an Earthquake? My dad would send me down to the dairy during a 6.1 growing up”

Seemingly unable to calm down, Dan double fist slammed a table and roared at a visiting OH&S consultant that he “WAS THE EARTHQUAKE”. Before rattling a cupboard containing coffee cups telling everyone this was a Bay of Plenty lullaby.

By 9:30 am, Dan had locked himself in a port-a-loo and was refusing to come out. He told us through the door,

“Earthquakes are our thing, why are Aussies always stealing from us? Pavlova, Russel Crowe and now talking about seismic activity like they know something. I need an L&P and the soothing tones of Dan Carter right now”

Coworkers are advised to steer clear of Dan with aftershocks of rage expected later in the day.