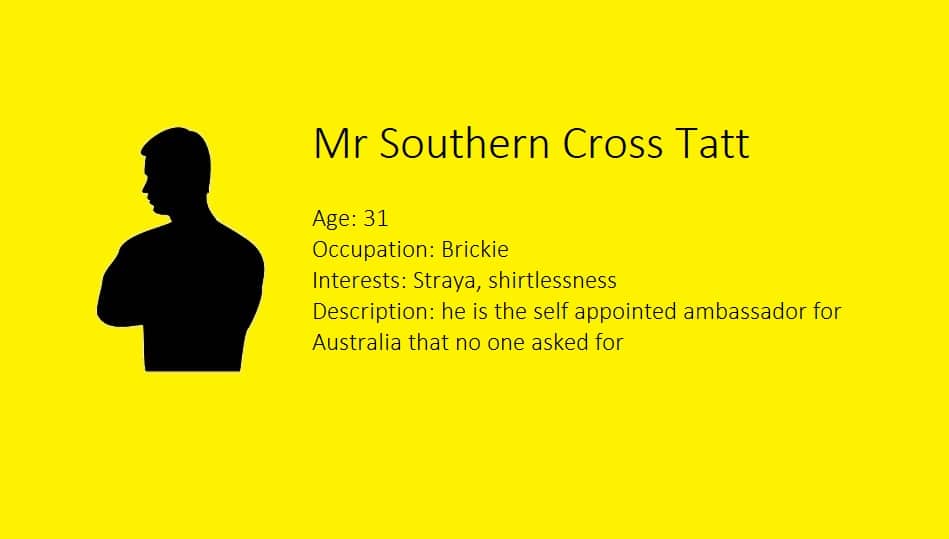 Tyler uses his Southern Cross tatt to navigate the sea of racial tolerance and find the safe port of excessive patriotism to help shield himself against ethnic storm he feels is brewing.

Despite being a symbol of his love of Straya he got the full torso length tattoo in Bali because he read a Facebook meme that said tattoo ink used in Australia was halal certified.

Nothing boils his blood quite like certification standards he doesn’t quite understand. Do you think any true blue Aussie patriot wants to knock his own brother out on Boxing Day for spreading Vegemite on his toast? It pained him to do so but he wasn’t going to let terrorism be supported on his watch.

Tyler calls in sick to work so he can head down to Mullaloo Beach to get some sun. He scratches off a tomato sauce stain on his favourite Aussie flag board shorts, slips on his third-best Bonds singlet and walks barefoot to his car.

Generally, Tyler doesn’t go anywhere without a 6 pack of Emu in his little esky carry-bag. Today is no exception. He slides a bikini babe stubby holder onto his wrist and wears it as a bogan-bracelet. He fires up his lime green Holden SS and carefully selects some Australian music.

While on the road, Tyler doesn’t fancy the prospects of letting a taxi driver merge. “Aussies first, ay”. In act of frustration, the taxi driver cuts Tyler off and gains pole position. Arguably an unwise vehicular manoeuvre to execute against a man with 3 “patriotic” bumper stickers.

Oh yes, those. They serve as a back-windscreen resume of the casual racist who wonders what has happened to this country, “Fark Off We’re Full”, “Love it or Leave It” and an outline of Australia with the word “FULL”.

Tyler foams at the mouth as he gives the taxi driver a spray at the next set of lights, to cap off his expletive-ridden abuse, he decides to deliver a low blow, “youse lot are shit at cricket too”.

Tyler is all worked up and needs to calm down. He pulls into a servo to fill up with petrol. Alas, his prejudice-y senses start tingling when he notices the attendant doesn’t look Aussie enough for his liking.

Accordingly, he drives off without paying. Naturally, his love of Australia doesn’t extend to actually supporting Aussie businesses.

At the beach, he sees several large, ethnic families enjoying the afternoon. He instantly whips off his wifebeater to expose his southern cross tattoo. He struts around with his chest out making sure everyone cops a big load of his antipodean antics.

He stares them down while he walks across the sand smoking a dart. In an act that screams “I Love Australia”, he chucks his dart butt onto the sand after he’s finished and breaks out into an Aussie Aussie Aussie chant.

He gets a few drongos joining in and the large families look noticeably uncomfortable.

Point made. He rewards himself for his hard work with several pints down at the pub while he waffles on about the state of this nation. If you don’t like it Tyler, leave.

FOR MORE: REPORT: Hardest Part of Carrying A Block On Your Shoulder Is Ensuring Southern Cross Tatt Is Visible