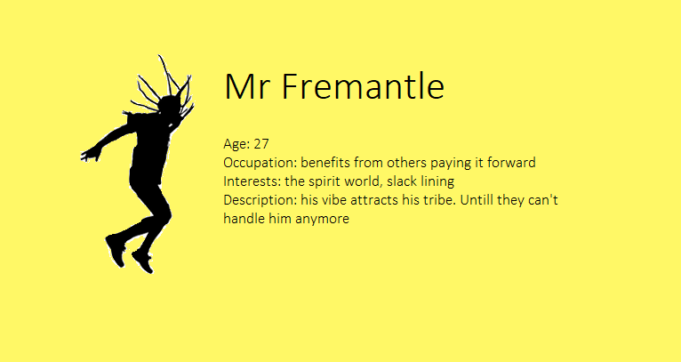 Earth Love or Lloyd as he’s known by his societal-slave name has just been booted out of his 3rd share house this year. He maintains his weekly drumming circles are far more valuable than the so-called “money” he owes for “rent”.

Needless to say, 3 of his major chakras are totally out of whack but he has the medicine – a bike ride into Freo for a few joints and a deep discussion about what a bunch of sell-outs his housemates are.

After getting uncomfortably high for a public setting, Earth Love treats his dreadlocked flock a didge solo he believes channels the cries of a harpooned whale.

Lost in the rhythm, he ashes his spliff on the foot of a newly-minted hippie who’s dirty hooves aren’t quite used to the barefoot life. She grimaces in pain.

Instead of a more traditional “apology”, Earth Love decides to heal her with his words, “let the ash cleanse you, humans are the only sentient beings that wear shows, so unnatural”.

It seems his extremely shit didge playing hasn’t gone unnoticed. A couple of seasoned Canadian eco-tourists make their way over. Celestial believes her aura is half whale and hangs off every word of Earth Love’s bullshit.

To make matters better, the man she is consciously coupled with really wants to buy Earth Love’s didge and some bead bracelets he has on. Earth Love has hit the jackpot so he invites the couple back to his van parked at South Beach.

Earth Love spins a yarn about the supposed “sacredness” of the souvenir didge he is flogging off for $100 and the tourists eat it all up. To celebrate this connection, they ask if Earth Love would like to take some shrooms with them.

Does he want Free drugs? Let’s just say he broke a record for the time it took to answer in the affirmative. It’s no exaggeration to say this is the best day of Earth Love’s life.

After several hours of slack-lining and discussing his plans to get a certificate from the national alliance of shaman to lead smoking ceremonies, Earth Love has a hankering for some free tobacco.

He decides Celestial’s partner should go down to the servo to retrieve and pay for a pouch because his energy is far too rooted in the moment. In reality, Earth Love takes the opportunity to act on the vibrations he’s been getting from Celestial.

He puts on some pan flute music and the pair become one soul in his disgusting van. Due to some “technical” issues with his Earth-rod, the deed takes longer than expected and the partner returns. Pulling open the van door to release a mighty stench of sweaty, barefooted infidelity.

Earth Love can’t understand the anger. He’s giving this kindred spirit the greatest gift of all – a bacterial infection of love. You just can’t please some people.