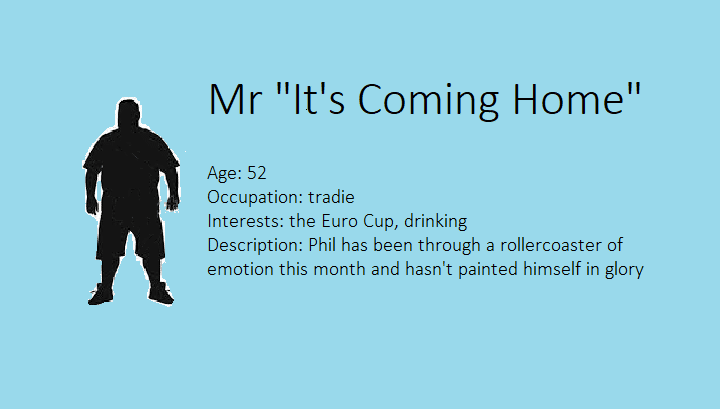 For the last month, Phil has been pumping England’s tyres like he just got a job in the Land Rover showroom. You see, Phil saw a piece of himself in the team and lived vicariously through its success – after all, they both share a history of 50 odd years of disappointing everyone.

Plus being drunk and sleep-deprived for an entire month brought Phil back to the days when he’d wave his spotted dick around at a Magaluf nightclub before passing out on the street with his dacks packed with 100% British pudding.

At first, the other tradies on site were worried. They’d thought Phil had experienced a religious awakening or something. Morning greetings shifted from “pissawff ya twatt” to “alwight ya twat”.

He still looked like a bulldog bred with a Stella can but increasingly he looked more like one of those smiley bulldogs. It was a pleasant change and proof that Phil was capable of feeling emotions of joy.

In reality, Phil was just misunderstood. An emotional scotch egg that usually only presented a crusty, meaty exterior to people. England’s success, however, had allowed people to penetrate through and enjoy the warm yolky goodness of his softer side.

As the final drew closer, Phil became more intense with his unsolicited assurances that “it” was coming home. Even letting sporadic cheers go in the middle of the Butler English products section. He hadn’t felt this proud of England since the Brexit vote.

As fate would have it, Italy would face England in the final. It was the Terracotta Lions v the Three Lions and Phil began smashing cans early in the afternoon. Launching a full green street riot on his liver with his mates who look like they are auditioning for a geezers on parole themed calendar.

By 3 am, Phil is as lashed as the backside of a horse coming 2nd in the Grand National. He almost chokes on a pig-in-a-blanket when Shaw slots a goal in the first 2 minutes. “ITS FOOK’N COMING HOME LADS”. Oh, and it had better be, he’s got next month’s rent riding on this outcome.

To his horror, the game’s outcome was to be decided by a penalty shootout. He knew England’s shootout record wasn’t too far off a drunk cowboy trying to engage his syphilis-riddled brain to hit his target at high noon.

Each miss elicited a word-galaxy of casual to full-time racism from his sloshing jaws. Elated boozing then turned to rage drinking when the outcome was decided. Forza Italia! It was clear to Phil, multiculturalism had cost him a chance at redemption.

To soothe the burn, Phil spends the next 6 hours sinking tins and going apeshit online in any forum he would. If he’s being honest, the racially charged diatribes were a low point but he hit his Mariana Trench when he created an Instagram account to send a 653 character length hate message to Marcus Rashford.

Lost in a world of anger, Phil rocks up 3 hours late to site and is immediately sent home. Just like the good ol days, he’d wet himself on his drink-drive over. It was a dead giveaway. So, he goes back home to stew in anger until he gets an idea.

His greasy Cumberland fingers work well enough to order from Pizza Hut later on. His plan is simple: bail up, interrogate and generally make Italy pay for ruining his morning. A perfect plan.

It takes Phil a few moments to process that a real-life Italian isn’t standing at his door. Not to worry, “you’ll do, lad, let’s fuk’n ave it???” Luckily for the young man, Phil has the balance of a unicyclist on the deck of the Titanic.

And, down he goes. When he wakes up he’ll need a trip to the dentist. Could things get ANY worse for an Englishman?