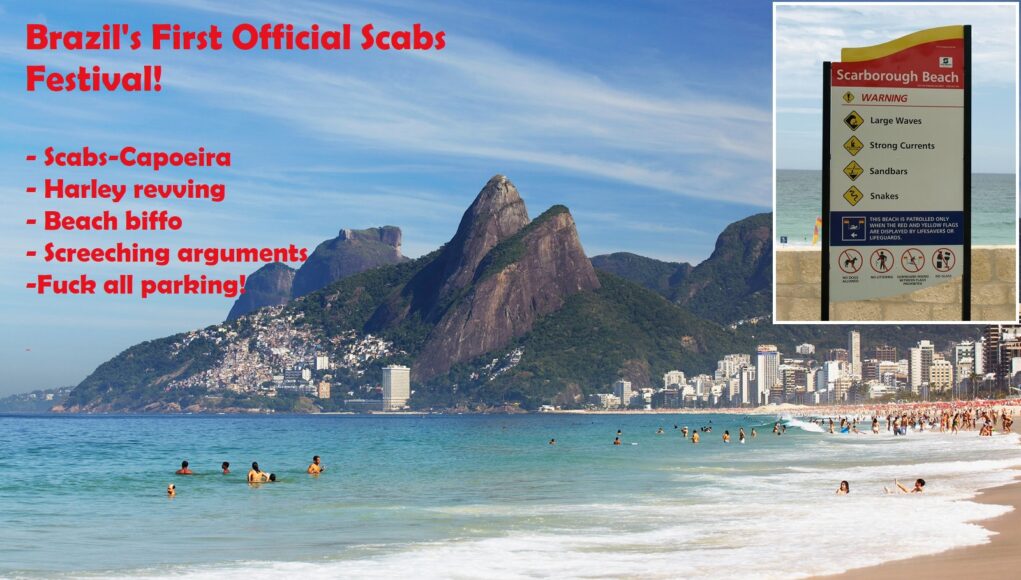 The beach suburb of Ipanema will be throwing the country’s first official tribute to Perth’s Scarborough Beach – the spiritual home of Brazilian ex-pats living in WA.

Unfortunately, the pandemic has meant many young Brazilians have been unable to make the pilgrimage across the pond to slackline, drum, samba, and generally clean up on the local Scabs Tinder scene.

“If our people can’t go to Scarborough then we’ll just have to bring Scarborough to them. We’ve all been through a lot but denying our youths a juicy slice of Scabs is a step too far”

To ensure the most authentic experience possible, Paes has sent the call out to the entire country to send their best & most aggro ex-pat Aussie turbos to the festival to start fights with more talented Brazilian surfers on the day.

Residents of Rio are encouraged to wear the native dress of the Scabs people. Paes told us,

“We want to see people really capture the magic of Scarborough so we encourage people to commit to the look. Perhaps a little leather bikie cut with some stick-on neck tattoos. Or a tight fluoro cocktail dress that you’ve pre-stained with Smirnoff Double Blacks. Be creative!”

Revelers will be treated to a unique display with their traditional Capoeira spectacle being replaced with a “Scabs-Capoeira” show. An organiser explained the ceremonial dance thusly,

“The scabs-Capoeira show starts with a tatted-up deadshit knocking into another tatted-up deadshit and once the man’s Corona with a slice of lime hits the sand the real show begins. It’s like bad Muay Thai mixed with sloppy hooks and primal grunting. It’s a real spectacle for the whole family!”

A viewing station will be set up on an available hill so party goers can stand around judging surfers and telling each other how they used to really charge the 20 footers. With absolutely no obligation to go out and prove it.

Organisers note that to stay true to the spirirt of the festival, parking will be in hot demand and punters should expect some car park biffo after driving around for 45minutes looking for a park. They are advised against taking the bus as that’s clearly not what people going to Scabs do.

The festival is planned to go for 3 days but in pure Scabs style, it will likely end when enough people are tasered.