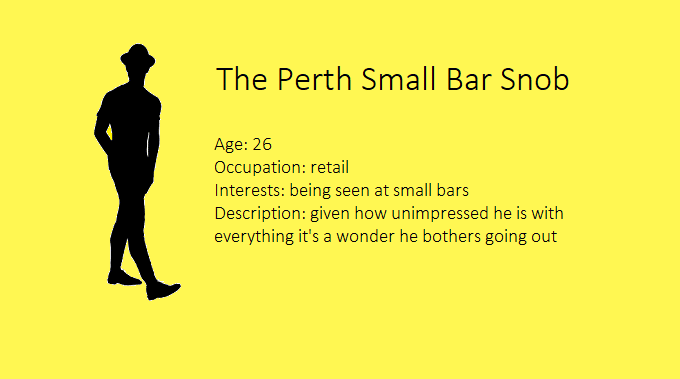 Ever since Taylor ordered a cocktail in a mason jar at some touristy Melbourne laneway bar in 2015, he knew he was better at going to licensed venues than the rest of society.

This self-professed king of nuanced piss-sinking wouldn’t dare be seen at a sterile chain pub. Oh no, he will only bless the most exclusive small bars he can find on Facebook listicles with his presence. Heavy is the head that wears the crown.

Taylor is dressed like a man that doesn’t agree with your taste in your music. A walking Pitchfork article with the fashion sense of a homebrand Triple J presenter. To complete the vain shrine to his delusions of grandeur he rocks “I know 40 different types of gin” moustache.

It’s Saturday, so he checks his Casio calculator watch – it’s small bar time. He slides into a local bar and in an act of dramatic shitcuntery, he pauses at the entrance, removes his glasses and canvasses the landscape. He has made his presence known.

He struts his way to the bar while his slimey man-bun catches the light like a stain on an old boy’s Spalding trackies. He then engages in a demented staring battle with the liquor display. He channels the 3 days he spent in Italy on Contiki and orders a Negroni.

He maintains a shiteating grin as watches on in judgment with each step of the cocktail process. He examines the drink, “oh, you make it that way, interesting”. He takes a sip and looks as impressed as Clive Palmer’s tailor. This is his role as an educator.

After managing to get in a few photographs and a group check-in, Taylor’s work is done. He proceeds to his next destination where he fancies a little live music. He looks forward to yelling his analysis directly into indie-chicks ears.

“Seriously, without a Key-tar these guys are going nowhere”. A scene girl nods politely while Taylor puts his hand up, closes his eyes and then re-opens them while shaking his head, “those last two chords were so off, I’m out, this music is pleb”.

Later in the evening, Taylor finds himself on his lonesome. He is sitting at the bar drinking a cocktail while boring the bartender with details of the musical atrocities he had endured at the hands of untalented musicians.

It’s a shame he’s a paying customer as his banter is as enjoyable as drinking the backwash from an antivaxxer kid’s cup. At this point, he is not just a wanker, he is a workplace hazard.