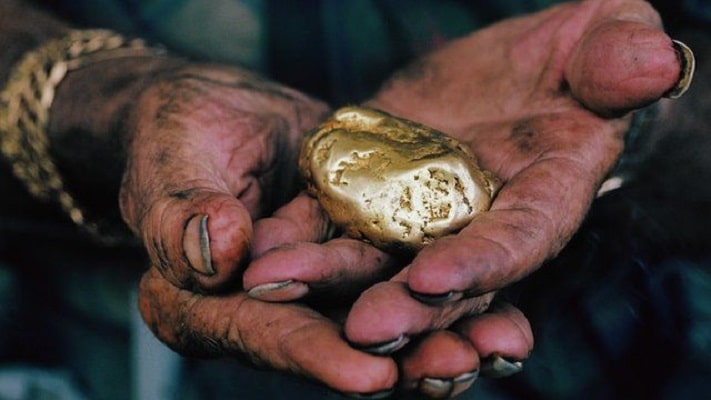 You don’t become the 35th least successful gold prospector in Kalgoorlie without making a few enemies along the way. A lesson Trav knows all too well.

Subscribing to a “work scummier, not harder” method, Trav is well known for heading out at the dead of night to raid equipment, paydirt and sometimes actual gold from fellow prospector’s camps.

Naturally, Trav can’t wait for Diggers & Dealers each year to crash corporate events at the pub to dish out some nuggets of wisdom.

It’s Trav’s contention that these big miners are “farken gooses” for their labour intensive & expensive methodology of surveying, drilling, mining and milling the precious metal.

A mining executive for one of WA’s biggest mines recounted the moment he was bailed up by Trav at the urinal of the Exchange Hotel,

“This guy got my attention by pissing directly into my piss stream at the urinal. His pants were around his ankles, he was slurring heavily and he didn’t even put his dick back in his pants when he was done. He just started asking me if i knew the *real* secret to gold mining”

Unsure whether the executive would share this bombshell of King Midasque proportions, we took a punt and asked,

“He said he had no overheads because he just stole other people’s shit. I was distracted by the lack of teeth in his mouth but he kept wooo’ing and yewww’ing about 100% profit and has only been shot 4 times”

“He made me promise I’d let him speak at our presentation on Tuesday and then forced his urine covered hand on mine for a handshake. Told me he was going to make us filthy rich”

Speaking to The Bell Tower Times, Trav told us,

It became abundantly clear that the gold chain around Trav’s neck wasn’t merely Jewellery, it was incriminating evidence. A bold fashion statement to be sure.

Asked what lessons big mining could learn from his technique, he said

“Think about it farkhead, the bigger the camp the more loot to steal. I’m knicking metal detectors and picks. On that scale you’d be flogging excavators and ball mills. What yous reckon, yas shareholders wouldn’t be stoked at a few MILLION bucks savings? Work it out ya flog”

Trav was last seen screaming “DON’T YOU KNOW WHO I AM?” at two crowd controllers as he led away from conference where he’d planned to upscale his operation with an impassioned plea to the big dogs. Clearly, the exec he accosted at the pub didn’t keep his word.

Not to worry, Trav will be waiting for him.