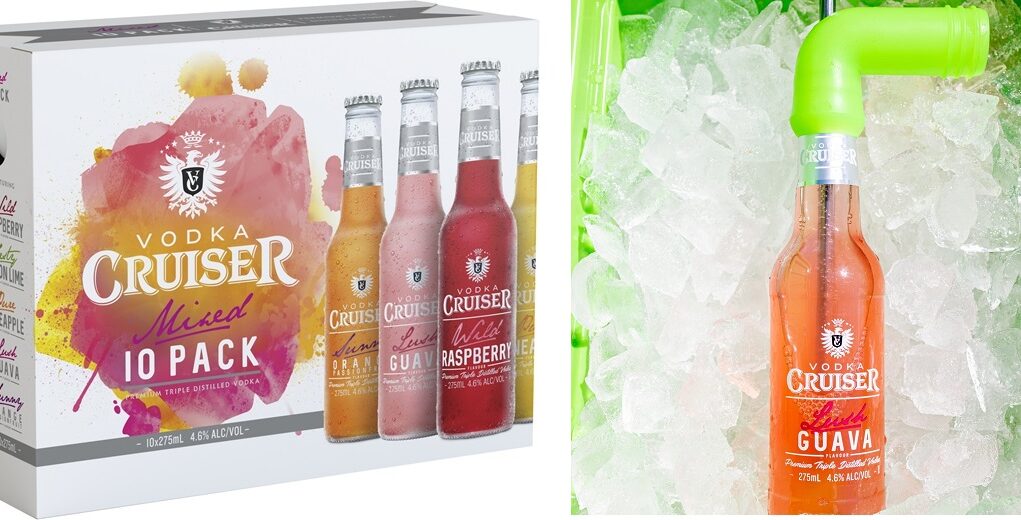 Cruisers truly are the forbidden fruit of the booze world. From teenage girls to fully grown Toolies, there is no stopping the rapid consumption of these fuirty bad boys, culminating in the most delicious spew you’ll ever release from your over refreshed face.

The first thing you’ll notice about Cruisers is that for a drink primarily favoured by children, they are farken expensive. Even Uncle Dans can only bring the price of a 10 pack to around $36. A carton floats around the ghastly $85 range.

Yep, that’s pretty pricey for a small bottle of soft drink with a couple of drops of vodka in ’em – 1 standard drink to be precise. You’d probably get drunker from the mist of a drunk bogan’s aggressive splashback off the wall of a urinal.

That’s if you drunk them like a civilised human being.  Which, of course, you wont. See, the decision to crack into the Cruisers isn’t a decision made by a sober mind. Quite the opposite.

Typically, the decision is made when the thought of drinking your 15th beer for the 40 degree afternoon is about as appealing as a prostate exam from the BFG. Why have drinks go down like razor blades when you can get lost in the fruits of the tropics.

Guava, pineapple, passionfruit, wild raspberry are all waiting to turn your stomach into a magical fruit punch. At the very least, it will make the inevitable toilet bowl serenading taste all the sweeter.

As for consumption, it appears that the only acceptable way to drink a Cruiser when you’re over the age of 18 is to skol one. Maybe two. If you’re being honest with yourself, they are only 275ml, you can fit a third in that funnel, mate.

Luckily, beer snorkels exist. Meaning you can get a Cruiser down your gullet in mere seconds. It’s similar to a funnel except you can do it yourself. Who said drinking by yourself was depressing?

Of course, it’s pretty devastating to see your $85 investment gets smoked in about 10minutes. You will likely turn on your friends who you accuse of taking too many.

Cruisers were meant to bring everyone together, not tear them apart. Expect multiple trips to the bottlo for these moreish little suckers.

It’s like the hello kitty of binge drinking and a great way for you to get an extra 10/15 more standard drinks in at the end of an already liver-smashing session.

No need to worry about inebrietation either. As you’ll continuously tell yourself that “it’s just one stando” each time. What harm could it do? A thought you’ll no doubt have in your mind as your mate’s wrestle your keys off you after seeing you consume 25 of em.

Just what you need, really. Best not to think about the sugar hangover that will double team you the next day though.

Could be worse. You could have regressed back to the stage in your life when you thought Smirnoff Double Blacks were a good idea. A Cruiser’s evil cousin. A drink that has ended more nights than a paddy wagon.