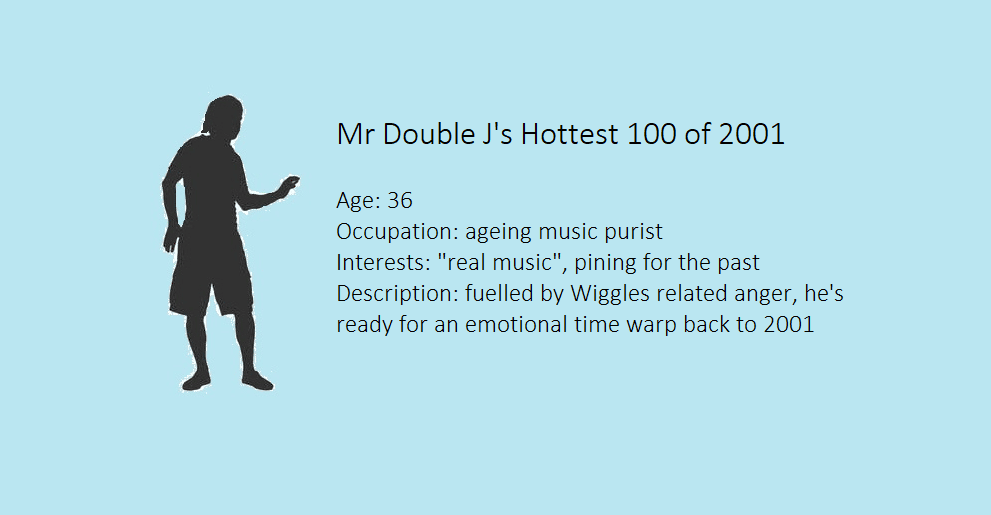 Truth be told, Trent probably could have dealt with the Wiggles taking out top spot in yesterday’s Triple J Hottest 100 better. Alas, after half a carton and a dozen Cruisers he was deeper in an ape-shitted fury than a gastro outbreak at the Zoo’s primate enclosure.

His memory is hazy but from what he can piece together he excommunicated his younger sister for “ruining music” and then tried to urinate on a group of youngins he heard discussing the Wiggles favourably down at Scabs later in the evening.

Feeling saltier than Mr. Ed’s money shot, Trent gets back on the piss-horse and prepares for a big Sunday session of redemption. This time, Double J’s Hottest 100 of 2001 would be on. When music was music and he wasn’t quite so scared of the long-term implications of TikTok.

Trent and his group were in high school in 2001 so the session gently transitioned from raw intergenerational hate to a nostalgic drone-bombing on the youthful village of their hearts. Trent even stops mid-rant about how he’s going to “find” Kingsmill one day to rock out to Sum 41 Fat Lip.

“Tuuuuuunnnneeeeee, remember how we snuck some vodka into that underage party at Zanzibar and glassed that kid from Kent St?”

The energy of the song shared a strange juxtaposition with Trent’s recollection of when most of his hair was in his thick mane and not on his back. He adjusts his levels by funnelling another Swanny D – keeping the melancholy away.

Trent is hooped up on youth-balls and is pigeon strutting around the yard calling zoomers a generation of pussies and how his personal taste in music was the high watermark of Australian culture.

Then, Crazy Town – Butterfly came on. This had a very peculiar effect on Trent. This one took him back to one of his first friend’s trips to Rottnest Island,

“Remember what yous used to call me, the kinga of the finga! How many roots did I cop on Rotto bro? I was like Little Jack Horner packing that thumb in, yewwww”

His pining for the past reached critical levels. He was invigorated with the kind of off-putting energy only an ageing alpha male could latch onto.

As the hits rolled on, Trent was oblivious to the state he was in. For a mid 30’s bloke with work the next day he was in a pickle. Perhaps a clue he should slow down was cooking an attempt to backflip into the blow-up pool. Giving him somewhat of a head injury.

By No.1 he was an emotional mess and then Alex Lloyd came on, “Wtf???? Worst No.1 pick ever, this is bullshit”.

Perhaps it was the drinks, maybe it was the head injury but the irony was lost on Trent as he ruined another sesh entering into a hateful rant about the no.1 pick. Some things never change when you over-invest yourself in a commercial radio station’s annual gimmick.

He spends the last few minutes of his conscious state goading people into a fight on Triple J posts on Facebook. It’s not much but it’s honest work.

He passes through to dreamland with a wry grin on his face. He’s going to take a steamer on the Zoomer work experience kid’s chair tommorrow. See him Wiggle around in that.