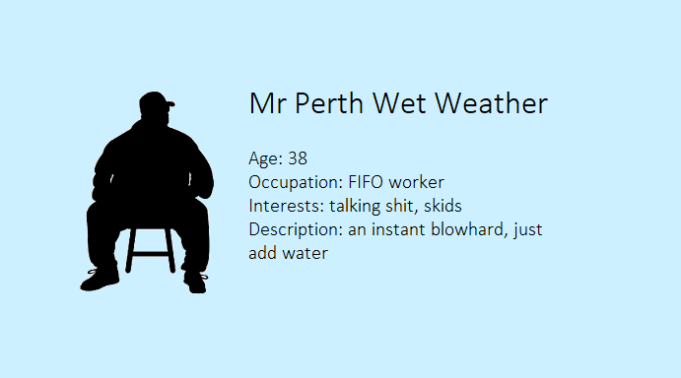 There is always a twinkle in Robbo’s eye when he sees rainfall in Perth. It reminds him of the back streets of Patong where he used to have his “chiropractic” needs rigorously attended to.

Alas, every time it does rain everyone around Robbo is treated to a gushing river of shit that flows out of his mouth like the backend of a trucker who had played bain-marie Russian Roulette on a late-night cheese sausage.

Like a goatee’d spider, he lays in wait for anyone to mention the current rainfall in Perth. As luck would have it, a bloke he used to work with expresses his annoyance with not being able to finish some construction work until the rain clears up in the comment section of a FB article,

“Tuffen up princesses hahaAH addd sum concrete to ya cornflakes, always crynin bout the weather aiii. I used to manage a krew in the Kimberely and we’d cop 10000mm of rain a day piece of piss… ! then yous reckon CLIMETE CHANGE,.. Get ur head outta a book ya nerds this is fark’n Straya get used to it lol”.

While walking to his car, Robbo notices his sprinklers on. Now, despite the pouring rain rendering his Bintang singlet moister than a substitute teacher’s armpits, Robbo reckons, “fark it”. Everyone knows a week of mild rain will replenish our state’s water levels.

On his way to the bottlo Robbo drives likes an idiot and manages to crash into the back of a scaredycunt who had the audacity to slow down to turn a corner. Next in the ménage à trois of evolutionary precum is a P-plater in a Skyline who grossly overestimated his abilities and slammed into the back of Robbo.

Being 9:45am, Robbo is already drunk and decides to do a little R Kelly bump ‘n grind to free himself from the pileup and piss off. He’s no stranger to a hit & run and executes the dog act with precision.

If he loses his licence, he loses his job for real, and that will mean he won’t be able to tell people about how he regularly has to work in conditions that make the Mariana Trench look like the piss puddle in your softcock nappy.

Mrs “Not in My Backyard!”