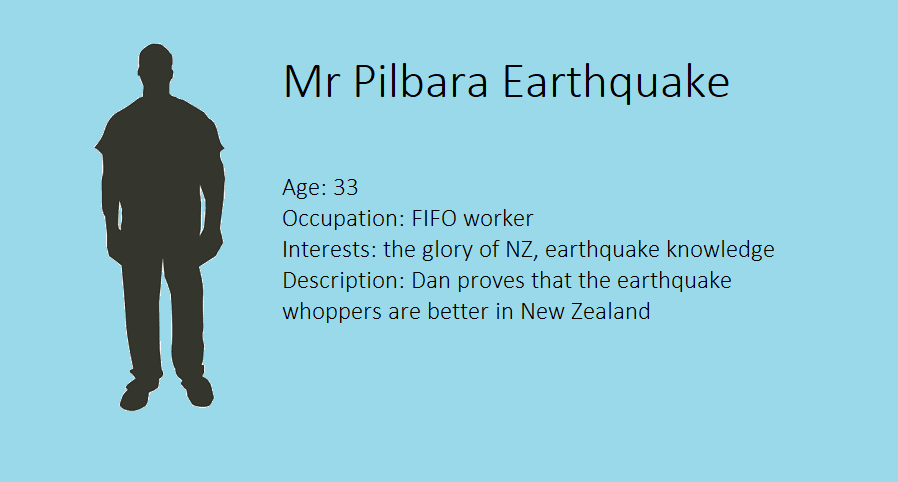 Dan was safely asleep in his Belmont dwelling when his FIFO-y senses tingled him out of slumber. He could feel a disturbance in shit-talk-force and had to restore balance.

As it turns out there was a rumble in the red dirt and Rio Tinto executives were pretty stoked it wasn’t them this time. There was a magnitude 5.4 earthquake around Marble Bar. Which according to some news sources is pretty much “Port Hedland”.

This was Dan’s time to shine. After migrating to Western Australia from New Zealand during the boom, he has always struggled to keep up with the usual Pilbara worker dick measuring competitions – heat, humidity, flies, etc.

However, earthquakes were right up his seismic alley. Now, just because he was close to 1500km away didn’t stop him from having a few choice words in the comment sections of various Facebook posts.

“Cute you rekon a 5.4 can even be called an earthquake, wouldn’t even be tools down beck home fr anythin under 6, ay, bro ahah aussies are such pussys… me and my uncle finished a sceffolding job through a 5.5, piece of puss ay”

This instantly ruffles the staunch plumage of FIFO feathers. As several men with profile photos of themselves standing next to giant mining loaders enter the fray.

Dan spends 3 more hours arguing with his peers as they describe how it felt like Clive Palmer had chosen a long vine in a Vanuatuan coming of age ritual. He finally succumbs to the effects of his 6th half-half bourbon and coke and sleeps it off.

The next morning he decides to continue running a clinic on earthquake knowledge. However, not before some shooting the shit with the bloke behind the counter at the servo as he picks up more darts,

“I wouldn’t even call 5.4 mean bro, beck home in New Zealand we’d just assume Cousin Tane sat down too fast ay. Should see the size of his arse bro! When I was a boy some visiting Aussie team wanted to call off the rugby game because there was a mag 6 warning, I told em the game goes on and ended up scoring 5 tries ay, bro ”

The servo man looks confused. He only asked Dan, “any fuel?” However, things weren’t sweet-as in Dan’s world. He could still sense Australians being soft and his chur soon turned to a grrr on the way home.

He notices an Aussie working at Cloudbreak telling everyone how this earthquake as fark all and going on to list the earthquakes he’s personally experienced in his “loife”. Not on Dan’s watch. Call him BHP because he’s about to derail this train.

“What you even talken bout bro? What, did the ice in your chilly bin rattle? Don’t you even know how the Richter scale works? A 5 is 10 times less than a sux, bro”

When an unstoppable one-upsman meets an immovable blowhard, there’s going to be some action. Without missing a beat, the Aussie FIFO worker responds,

“Nah get farked ya sheep shagger… u try settin up mine in China as the only farken bloke speak English during a magnitude 8 bloke, then talk to me… ai”

This attracts another fantasy world dwelling bullshit artist who claims he was on an oil rig off the west coast of America when a 9.5 hit. If it wasn’t for his quick thinking it would’ve been another BP incident “no question”.

So enraged about being challenged on earthquake knowledge, Dan decides to spend his day drinking at his local and eventually picking a fight with a blast operator who claimed he knew a thing or two about making the ground shake.