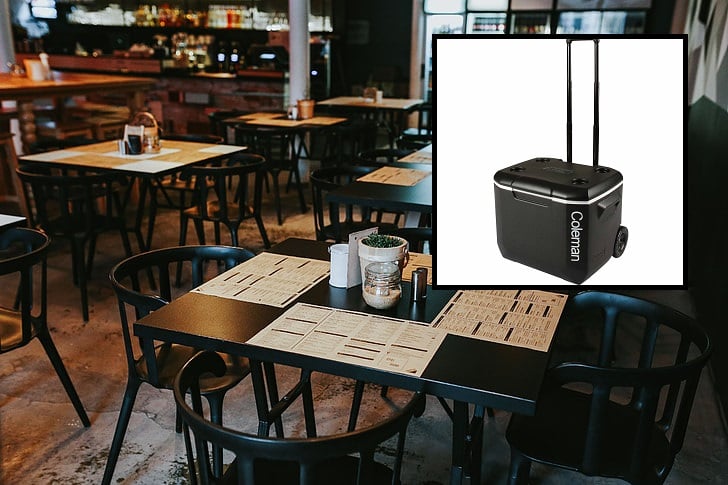 Redcliffe man, Jacko wasn’t keen on going to dinner with the misso’s in-laws on his self described “drinkin day”.

Telling “the ol ball & chain” that he’s not going to go to the effort of putting shoes on just to pay $8 a stubby at the restaurant. He was very close to putting that hairy, barefoot down until Kelsea told him, “it’s BYO you boofhead”.

There are few acronyms in existence that pulls Jacko’s man-pork harder. We spoke to Kelsea about what unfolded next,

“I hadn’t even given him the hard word of actually wearing footwear this time when he was in his good going out pluggers and on the blower to the restaurant. He isn’t one for small chat so when they picked up he just barked ‘BYO includes beer roight’, you could tell by the way he lifted his leg to rip a cheeky that he was given good news”

Moving at a pace Kealsea hadn’t seen in some time, Jacko was loading up his beloved 57L Coleman wheeled esky with the contents of his beer fridge. By rough count, he loaded about 28 tins and a small bottle of Jimmy B “just in case”.

Arriving at the restaurant, the staff was noticeably irritated that Jacko had wheeled in his sizeable esky. Jacko picked up on the sentiment was nipped it in the bud quick smart. He told us,

“YOUS TOLD ME, BEER WAS PART OF THE BYO THAT’S A VERBAL CONTRACT BETWEEN YOU AND ME. A MAN IS ONLY AS GOOD AS HIS WORD”

He had them there. They hadn’t specified how many beers he could bring in and were really regretting their generous corkage charge.

After sitting down, it was obvious the esky was blocking other diners, the staff, and even Jacko’s own party of 4. A waiter diplomatically asked Jacko if it would be alright if they kept the esky in their kitchen and he could ask for beers when he was ready.

It’s best to describe what happened next in the words of Jacko himself,

“I told the little cunny that the beers stay next to me. How would he like it if he had to have even a seconds pause between froffs on his DRINKIN DAY. Told him to use that big brain of his and step over the esky and to fark off”

Jacko got through about 13 beers during his hour and 45 minute meal. Not a bad effort given he also found the room to stuff in 2 mains down his fat gob.