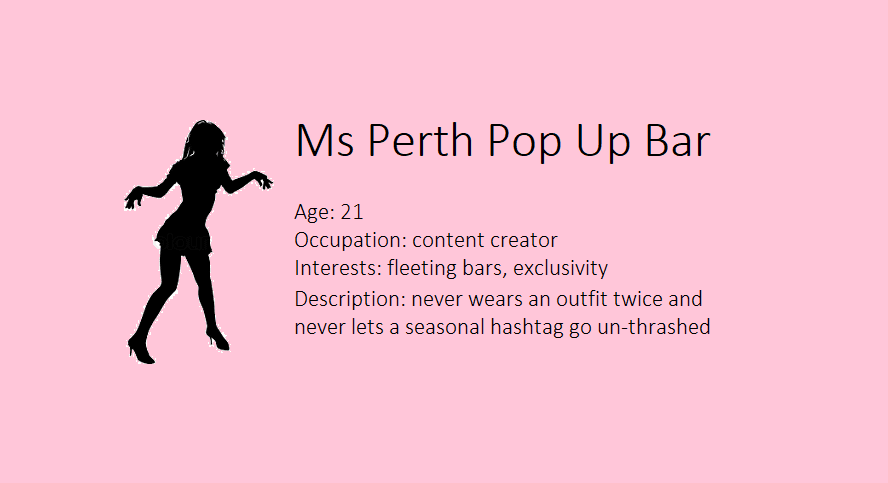 Sharlean has been fighting a stage 5 infection since the start of summer and despite bars stretching the definition of “pop-up” further than the skin on a Cottesloe cougar’s facelift, she wasn’t going to miss out on the chance to drink out of a plastic cup or sit on “furniture” stolen off a forklift while the driver was distracted with a portaloo-pornsesh.

Just to clarify, Sharlean isn’t like all you other basics, she lived in Melbourne for 3 months and knew a thing or two about pop-up bars. She knows that there are only 2 nights that matter, the night the bar pops up and the night before the bar pops down. It’s called being in the “in-crowd” sweetie, look it up.

Sharlean also knows that the key to pop-up barring is to act like you’ve discovered a hidden gem that the decidedly un-vogue masses of Perth wouldn’t know about. It’s not like they have read the same Broadsheet or Urbanlist article that any knuckledragger with an internet connection has seen.

Opening night, so Sharlean needed to be in attendance. She stormed into the venue like she was premiering her latest Kookai playsuit on the red carpet of the Oscar Awards Cuntemony.

She ignores at least 5 other socialites she knows as she races to get an Aperol Spritz, the official drink of being a hip, cultured influencer. Once she has her drink, she utilises her boyfriend for the only thing he’s good for: being her personal photographer.

Now that she is Instagram ready, she acknowledges the existence of some other girls she knows. She sizes them up to make sure their outfits and faces aren’t cuter than hers and eventually satisfies herself that they will be forming her “squad” for the shot.

She makes her boyfriend retake the photo 7 times before she is satisfied she is slaying and her “besties” look like unslayable dragons:

Following her own photoshoot, Sharlean spends the rest of her night stalking who she suspects to be event photographers. Why? Well, Sharlean has a silly little dream.

A dream where her photo is used by Kartel’s social management team as the thumbnail on their next event post on social media. To the casual observer she IS obviously a VIP, a paid model and the undeniable face of the pop-up bar.

While she sends her simp off to line up for some drinks, she notices that a rival oxygen bandit is holding court with what could be a group of rising WAFL stars. They are speaking to a DJ and a professional photographer is looking dangerously like he’s about to take a snap of the beautiful people.

It’s the kind of photo that would be destined for the main page of a pop up bar instagram account. Sharlean is gutted. Her night is on the brink of being ruined but she has the medicine.

Unsteady on her feet, she stumbles over to who she thinks is a bar supervisor and tells him that the skank taking photos with the DJs was in the toilet trying to sell people caps. After deeming the supervisor’s actions inadequate, she charges over to security to sing the same snitchy song.

You have to spoil a few eggs to stop a d-list fame omelette being served up after all. Alas, her plans backfire as her maniacal ranting turns the security against her. She is swiftly escorted out and to her horror the footage is caught on about 100 cracked iPhone screens.

Seems like Sharlean became famous after all. Doing the rounds on the Snapchat circuit as the crazy broad screaming about 1 star reviews and threatening that this bar will never pop up in this town again.

Please watch out for the signs of pop-up bar fever this season. Don’t let your friends become statistics.