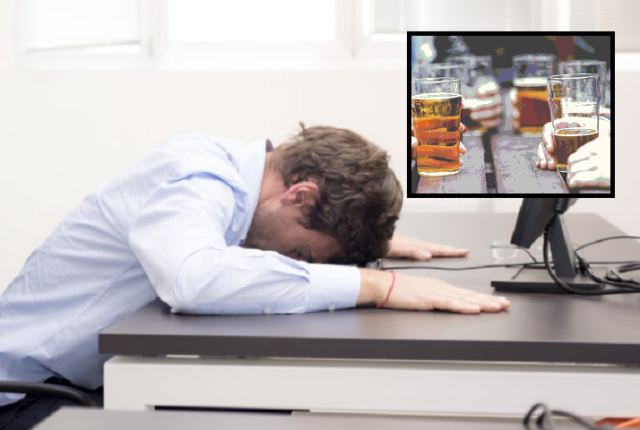 Jeremy hasn’t done a fucken thing since about 11:45 this morning when he left his workstation to feast on a tray of leftover pastries in the office kitchenette.

After impressively killing 30 minutes talking to Bernice about her upcoming crochet class on the weekend, Jeremy decided to take himself off for lunch slightly earlier than usual.

Of course, This extra lunchtime would spell the inevitable downfall of Jeremy’s productivity after finishing his first lunchtime pint far quicker than anticipated.

Unsurprisingly, this pattern continued for each subsequent lunchtime froffy and by 2 pm his shirt was stained with aioli he was walking around asking businessmen if he could buy a dart for $2.

Talking to The Bell Tower times, Jeremy told us,

“I was charging man. This long lunch was just what I needed to get my head straight and in the right mindset to smash out some work this arvo. Or so I thought”

He had been lulled into a false sense of productivity and upon returning to the office he was unable to stop himself from laying it on thick with the new attractive receptionist.

Perhaps if only he’d taken her offer of a breath mint as a sign that all wasn’t as it seemed in his half-cut fantasy land. Looking back on the events, Jeremy told us,

“Yeah turns out I was just a bit pissed, to be honest. My buzz started to wear off by about 3 and I felt like dogshit. Real existential crisis kinda feeling. I couldn’t fathom how I was stuck in this office for another 2 hours when the sun is shining and the drinks and flowing out there”

Jeremy had truly become a grotesque parody of “productive Jezza” as he called himself some 45 minutes before. Mindlessly, writing out to-do lists. Organising folders on his desk. Attempting to call a client by hanging up after only 3 rings.

This was a shadow of the man he thought he was going to be this afternoon. After playing the pork recorder in the toilet, he was able to muster up the zen to send a single solitary email.

An achievement that he rewarded himself by walking down to the local newsagent and buying several $1 scratchies to keep himself entertained.

By the time 5 pm rolled around it is estimated that Jeremy performed 4 whole minutes of productive activity since leaving the office at 12:15. Looking back on it Jeremy said,