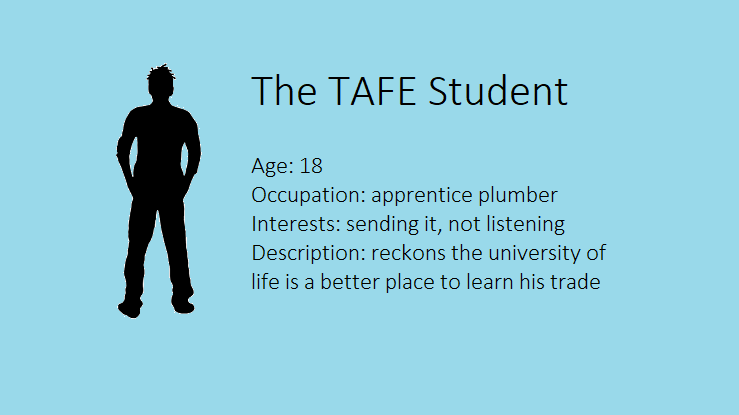 Thaison rolls into the Rockingham TAFE car park in a flogged out Triton with a large “SEND IT” sticker across the back window.

Never one to disrespect the sticker he decides to take his baby on a little bash through some small shrubs before parking up and retrieving his old faithful Gatorade billie from under his seat.

Joe Rogan assured him a bit of wacky tobaccy was good for brain learning and that was all the assurance he needed. He scrounges a cone that is 50% spin and sucks it back before coughing up a delectable lung oyster and slagging down his driver’s door.

He proceeds to class fashionably late for the 34th class in a row. True to form, he refuses to apologise for this tardiness. “Parkings a joke, boss, I tried to get here on time, maybe fix the parking, ay”.

He’s dangerously un-stoked about today’s class as it’s still banging on about carrying out WHS requirements. After all, his aggro brother is also a plumber and told him there’s nothing some farkwit TAFE instructor could teach him that he couldn’t.

This is coming from a man who has had to defend his plumbing licence three times in the last decade. One for trying to bring a fake peen into a piss-test. So Thaison knows who the real expert on pipes is.

Unable to let his inner clown go he habitually interrupts the instructor with the musings of a moron. When quizzed on JSAs he proudly holds up both fists, “I’d tell any OH&S cunny that I’ve gone and done two JSAs then ask him which one he wants first, bruz”.

His surfer mate goes off like a howler monkey but the older students get a painful dose of reality – these little turds will be working alongside them at the same skill level soon enough.

Thaison couldn’t care less. He’s got a job with his family plumbing company and he’s trading d-bangers for help on all his assignments. He reckons he should be teaching the class on how not to be dumb dogs.

For lunch, he takes a little journey to the Caltex to load up on a coupla sausage rolls, 5 packets of sauce and a 2 fa iced coffee deal. As his brother said, plumbing is all about the right diet.

It’s the perfect nutrition for a man training to spend 3 lengthy sessions in the toilet every day. As his brother always says, there is nothing better than getting paid to shit.

Last month, he watched half an episode of Peaky Blinders and had a wank instead of learning about type A gas appliances. His brother was so proud that delivers a fake gut-punch and gives him his 4th can of 6.9% Jacks. High praise from his bro.

After a busy day of drawing Stussy S, cock’n’balls and surfboard designs on his notepad, Thaison walks past a group of obvious sparky apprentices by delivering a devastating schlong in mouth gesture and calling them gay.

Who do they think they are? Rocking up to TAFE in clean clothes and unmatted hair. They are everything that’s wrong with the state of Australian trades, or so his brother keeps telling him when Thaison drives him around on weekends as his E-Plate won’t permit him to drive himself.