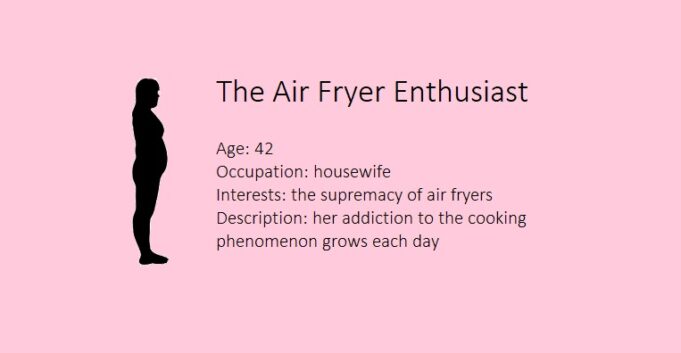 Sharleen’s life changed forever one fateful night in the backyard of a Rivervale 40th birthday bash. She was sitting around a Balinese themed outdoor setting with only bamboo torches for light when she was offered a plate of Coles’ mac & cheese balls.

Being no stranger to the frozen food section she didn’t hold high hopes as she shoved several in her gob while washing each half-chewed mouthful down with New Zealand savvy B. Something was different, though.

“We cooked them in the air fryer Shar, you can really taste the difference can’t ya”. She called her friend a lying cow and tried to force a confession that they owned a deep fryer. Her interrogation proved fruitless and she immediately fell in love with the appliance.

Her life began spiralling out of control after purchasing a $45 unit from Woolies. Spending her days on FB air fryer recipe groups and eating more oven chips than a divorced stoner.

It wasn’t long before almost every conversation she had with her friends was about what she’d cooked in an air fryer. Socially castrating any stuck up mole who didn’t bend a knee to the king of appliances.

Real cracks started to form when she slapped her youngest in the face for insisting he wanted to use the toaster for his toast. Forcing the boy to load the bucket with two slices of wonder white while she cleaned up the blood on his lip.

It didn’t take long until this cheap, entry-level unit wasn’t meeting her needs. Its lack of girth was leaving her in culinary frustrated-flush and she looked with envy at other housewives who were fitting serious slabs of meat into theirs.

So she did what any sane air-frying fanatic would, and purchased a brand spanking deluxe model for her hubby’s birthday. Alas, he hadn’t warmed to the appliance at all as he was currently stuck in the grips of a dangerous low & slow BBQ obsession.

Needless to say, being forced to watch the beautiful steaks he bought for his birthday destroyed in an air fryer was a cucking of almighty proportions. He put up a fight but Sharleen had the look of a serial killer wearing her victim’s skin kinda look in her eye.

Each bite killed him as he thought about how good the steaks would’ve been over hot charcoal. It was clear the air fryer was now becoming the unwanted cornerjacker in their matrimonial boudoir.

Tension reached an all-time high after he came home the following night after a pub session with his mates. In a drunken stupor, he decided to make his peace with the air fryer and got a little creative with a half-eaten pie he’d dragged from the depths of a servo bain-marie.

He slops it into the bucket, adds a couple of Kraft Singles and finishes off his pièce de résistance with generous squirtings of Sweet Baby Ray’s BBQ sauce. He drunkenly sets it to 20 minutes and passes out while sitting at the table.

When he wakes up he checks on his neglected snack. Unsurprisingly, he’s made the air fryer bucket look like a toddler’s nappy after he heard Pell’s conviction was overturned on appeal. Sharleen flies into a rage when she sees it.

She screams about divorce as her hungover hubby scrubs the caked-on disaster. She can’t express her outrage enough, as today is the day she was going to destroy a local mum in the air fryer FB group by cooking & posting a competing fish & chip recipe.

Sharleen’s recipe was going to bankrupt the fish & chip industry as you know it. This other wannabes probably smelled like a mermaid’s thrush. It’s ladies night, and like Amazonian dick fish, the group of 10s follow the stream of happy hour piss until they invasively enter the...