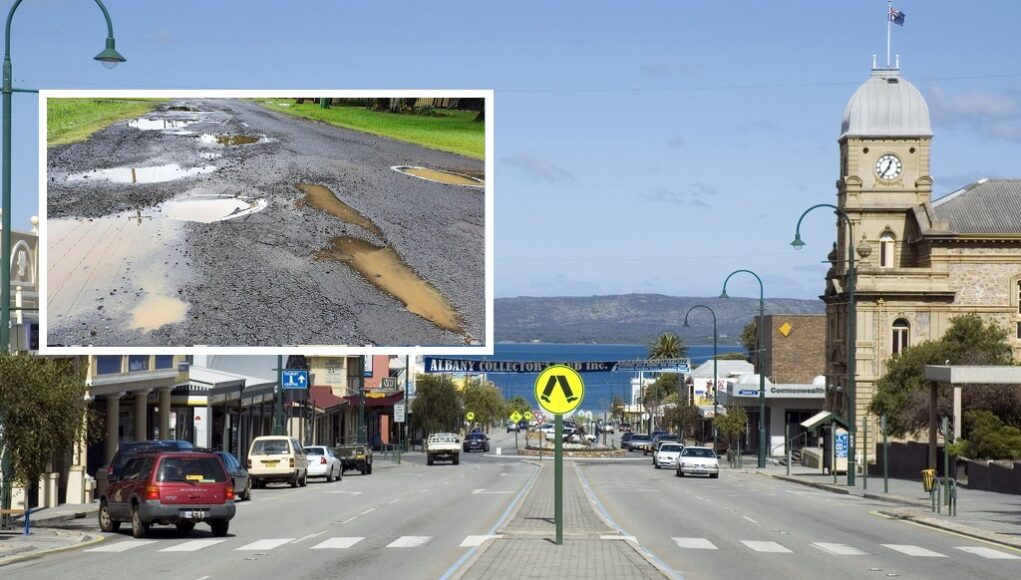 Tourism WA has made the bold decision to lean into Albany’s reputation for having roads with more holes than an English hooligan’s smile. Offering fun pothole-related activities to tourists this summer.

A spokesperson for Tourism WA told The Bell Tower Times,

“You know what we say in Albany, come for the 3 nice days of weather a year and stay because your car got shot to shit when you hit a pothole. So we may as well embrace what we have and offer tourists a chance to experience the potholes in different ways”

We asked the spokesperson what activities we could expect this summer. They told us,

“We’re just putting the finishing touches on the pothole dodge derby, that’ll be a great way for revheads to test their suspension. Then we have pothole decorating for the artsy-crafty types. Oh, and kids can take part in the great pothole treasure hunt. With prizes scattered throughout the city’s thousands of road safety hazards”

In addition to the hours of pothole fun, you’ll get with your season pass there will be practical workshops too. Mainly, tyre changing and advanced classes in wheel realignment which “may come in handy” after a few hours exploring the potholes.

We spoke to Chris, a local who has spent much of his adult life complaining about the potholes on Albany’s roads. He welcomes the initiative,

“Yeah look, I reckon we’ve all lost hope that the farken potholes will ever be properly addressed so we may as well make a few bucks off it. Plus I like it when those Perth city girls come down, they wear all that cocoa butter, and yeah they stink good, real good”

Moving as far away from Chris as possible we spoke to a Jax who told us some new tourist attractions were needed,

“Tell ya what bro, it’s tough when the fam comes to visit and I run out of shit to show them in the first 15 minutes. There’s only so many times you can put a traffic cone on dog rock’s head, bro”

Similarly, Talia, another Albany local said the pothole tourism industry would be great for the kids because boredom in Albany can be a problem,

“I’d much rather the youngsters get jobs showing tourists the potholes or they’ll just end up in Spencer Park doing burnouts and god knows what else they get up to there. Let’s just say no porch lightbulb is safe!”

The initiative comes with an extra silver lining for the Government with hopes the tourism campaign will be so successful they’ll stop getting asked to fix the problem every 2 seconds. “We must learn to live with the potholes”, a source told us.

Get in fast, the $500 season pothole ticket is already selling out. Don’t miss out on the South West’s hottest new tourist activity.

In a measure to protect adults from the risk of playing with equipment with known DPF faults, Cottesloe Council has imposed a fee for...