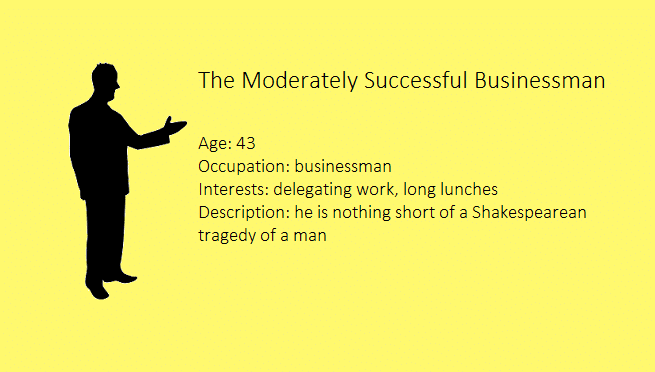 You don’t climb to the middle of the vending machine software game without making a few enemies. David now commands a salary of over $105k a year and you can see him driving around town in a $35k Xr6 Ford Falcon; the haters can’t stand it. That’s some moderate dick energy.

Under David is a team of 10 long-suffering staff members that have stood by him through 3 midlife crises. They have come to tolerate a man who hasn’t done a minute of work in 5 years and won’t stop practising his shit golf swing when he’s developing you.

Why work when you can have more free lunches than the hamburglar? See David is passionate about “networking” which is business code for using company funds to go and get pissed with your other middle-aged business parasites.

You may think that a man who hands out his merchandise to any waitress with a pulse would behave in a manner that wouldn’t bring his company into disrepute. Wrong. When he’s got his snout in the AMEX trough he behaves like a toey pig who has reverted back to his University drinking banter days. It’s rough.

Nevertheless, long lunches are his natural habitat and today David has organised a get together with the 4th biggest food importer for industrial cafeterias this side of Randford Road. A waitress dies inside as the two titans bombard her with questions about the 3rd cheapest bottle of wine on the menu. A macabre charade seeing as the men plan to neck it like they were Jeffrey Epstein.

Before David launches into his grand plan for dim sim vending machines he entertains his associates with sordid tales of his pre-COVID regular trips to Thailand each year. No detail spared. His mate tries in vain to stomach his seafood entree while hearing the Viagra chronicles of David’s power-chode.

After 4 more bottles of wine, David’s face is redder than a slapped baboons arse and he is soliciting the hottest wait staff to come work for him. It is at this point he is asked to vacate the premises. Alas, the party isn’t over, so he invites his guest back to his place – a grand bachelor palace in a shithole suburb. The Great Gatsby of Gosnells.

His love-pad is quite a sight to behold. An entry-level 4 seater spa sits on the deck with several Ikea mirrors positioned strategically around it. David’s saddo-sense starts tingling and he can tell his guest is mildly impressed, “amazing what you can do when you give your staff gift baskets from the bowels of China rather than Chrissy bonuses, ay?”

The men sit in the spa and try to ignore the fact their legs are in direct contact. After one too many Johnnie Walker reds, David leans out the spa and exorcises the toxin demons from his stomach. He looks back at his guest fresh as a manure covered daisy, “should I organise us some girls, mate?” Ballers.