A trip to Amsterdam is like standing before a timeless piece of artwork strewn across a canvas of rich Euro-history, and then dragging your gurning face against the furry wall of its foreboding cobblestoned alleyways while your dignity serves a life sentence in a psilocybin and THC prison. Your only chance of parole is a seedy liaison with an Eastern Promise in a window booth that combines regret and convenience on a mistake-stained mattress.

Adam flies into Amsterdam from London and catches the train straight to Amsterdam Central. A seemingly innocuous train station that has served as the entry point of dreams & escapism for those who stepped up to the Amsterdam-roulette, rolled the dice and got schooled by the brick and mortar beast we affectionately know as the Dam.

Adam is pumped and heads straight to the Flying Pig. He offloads his shit and heads straight down to Dampkring coffee shop to take the edge off. He peruses an exquisite weed menu while remembering unfondly the open-house weed shops of Belmont. He shudders, while he orders a gram of Nepalese Hash and three grams of AK47: a strain of weed that was destined for the lungs of seasoned smokers.

Next stop, is the nearest smart shop for a few packets of Amsterdam’s finest truffles. He chats with the mungbean behind the counter who enquires whether he’d tripped on psilocybin before, “sure mate, smash the Balingup subs every season”. The cooker smiles with the kind of madness that an ordinary person would take as a warning sign. Nevertheless, Adam leaves the smart shop with a few packs of Dragon’s Dynamite: a potent truffle that could well be considered a holiday in itself. Adam is armed with enough fire-power to wage full-scale nuclear war on his sense of reality and subsequently, his underwear.

A rented bike is his next port of call. He goes to see some cheese-scoffing Amsterdam local. He rides back to his hostel and suggests sparking up a joint of AK with his new-found travel buddies. They pass the joint around the table while some American fuckwit dribbles on about “bowl hits” and “blunts”. Adam ignores his incessant freedom-talk and sucks in the potent ganja.

A couple of large busted British slurries make their way over and ask to join. Adam underestimated AK47’s power and his eyes glaze over with the fear of conversing with females while being ripped as Iain Hewitson’s pants after a Sizzler salad bar. He overcomes the fear by smashing the Dutch beer of choice: Heineken.

The beers slightly level him out while the AK47 has sent the other Aussie “hero” into a tail-spin of weed/alcohol nausea. Where did he think he was, Woodlands?. He suggests to the slappers that they smash some of the truffles and run amok in the Red Light district. Solid plan! Within 35 minutes the trio is laughing uncontrollably and forgetting how to utilise even the basic functions of life. Hours pass quickly as the world looks like a long exposure photograph on a rapid flicking Powerpoint presentation. They bond like NA with CL but the next morning are left feeling the salty sweat of a memory blackout.

What happened that night? No one will ever know. All Adam knows is that he can never look at the British girls again and that the inevitable fucked-upedness will eventually flood back into his memory. Such is par for the course in the Dam. 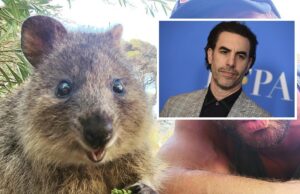 Western Australians are understandably shocked that a celebrity has entered the state and hasn’t fulfilled their obligation of “selling us to the world” via...