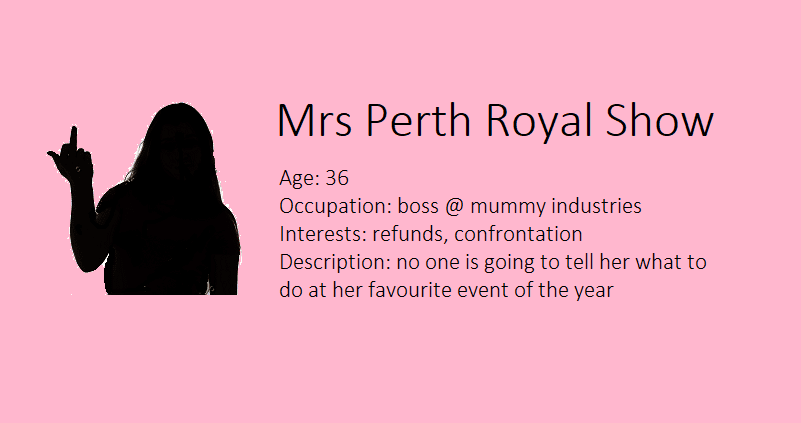 For the uninitiated, the Royal Show is like transporting the patronage of the Motorplex into a petting zoo with overpriced rides and food greasier than the colonel’s refresher towel after a Kentucky fried chicken choking.

For Shontell this year’s Royal Show was touch and go. Money was tight on account of her former FIFO husband’s 2-year hiatus from the employment sector. Or in his words, “I ain’t working for less than 130k a year ay. Fark that”.

Desperate times call for desperate measures and the family was able to put away a sizeable fund towards the day by stealing people’s Hello Fresh boxes from unattended doorsteps. “The perfect crime”, according to Derron.

Upon arrival, Derron brings some of his award-winning bartering skills to a child spruiking a car park in Claremont. After effectively making the child fear for their safety he parks up on the verge, “I’ll rip up their lawn on the way out, darl“, he assures Shontell.

At the ticket box, Shontell acts like someone is forcing her to attend the show “how much for entry??? Then yous expect us to pay for everything inside. Yous are ruining me kid’s days!”

After several hours of splashing cash to the aromas of barnyard shit and sweaty bogan-hooves in Crocs, Shontell decides to try her luck at sideshow alley.

She launches a baseball with all the coordination of a Caucasian wedding dance floor and fails to win a major prize. “This is rigged, now me daughter won’t get a Peppa Pig toy, yous have ruined her day!”

Derron doesn’t give a shit as he mauls a dagwood dog and tries in vain to catch a guy in a Holden racing jacket looking at him. “Weak as piss karnt”, he mutters as he staunches his way past the man on his way to lament the carefree life of the prize pigs, “life’s just one big smoko for yous lot ay”.

It’s time for a ride, and Shontell takes her two little angels to the gnarliest fuckballin’ ride she can find. Surprise surprise, the kids are about 30cm too short and are denied entry. Now, the certainty of her kids being viciously hurtled to their doom pales in comparison to the fact they’ve been waiting for an entire 10 minutes.

When it comes to public shame Shontell is a seasoned campaigner, so she screeches and flaps her Lean Cuisine wings like a meth-Macaw, “YOUS ARE RUINING ME KIDS DAY!”

Christ, someone call Burgo, because that’s officially her catchphrase.

Only one thing can extinguish the raging fire in the fat-fryer of her heart: Bertie Beetle showbags. She joins a meaty queue and waits with all the patience of Iian Hewitson at a Bunnings’ sausage sizzle.

After 15 minutes a young showbagger makes a grim announcement, “Sorry folks but we’ve run out of Bertie Beetle bags”.

Shontell is restrained by security as she tries to claw the man’s face off. Derron finally pays attention to his family. Suddenly, a sparkle forms in his eye, it’s what he’s been looking for all day as he throws himself into the fray, “Yewww, oos oos ya weak dogs”.

After being escorted from the showgrounds, Derron makes good on his promise to rip up the rich kents lawn and day ends with young Ahmani throwing up in the back seat from a sugar overdose.