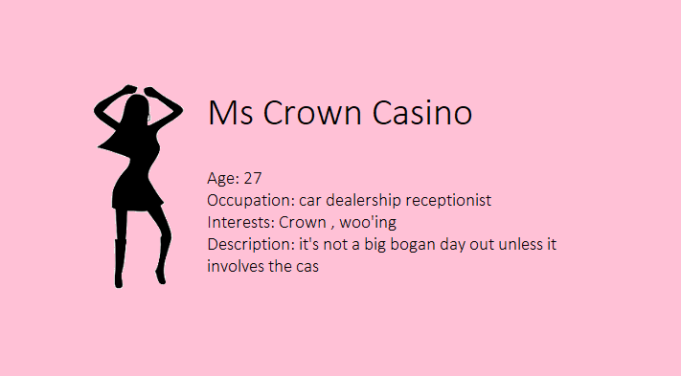 Chrissy is pacing around her Rockingham duplex while trying to figure out what to wear today. It’s her birthday and she has assembled her dream team of bogan friends to meet her down at Crown for a day of decadence.

She slips on her Night at the Thotsbury attire and runs a leopard print GHD through her peroxide hair. “Braaaaaad, have you ordered the Uber?” Predictably, Brad hasn’t ordered the Uber and is still wearing his jean-shorts while playing with his Pit Bull puppy in the backyard.

“Aw shit”, Brad downs the rest of his Jack & Coke and pulls out his cracked-screen iPhone to try and order an Uber. He then makes a bold attempt at ironing his black Billabong button-up shirt. The scene is reminiscent of Derek and Hansel trying to extract files from INSIDE a computer.

The Uber waits outside while Chrissy bumps a quick line of gear. “Get it in ya”, Brad jokes as he waits for his turn at the gear.

Chrissy sits in the back of the Uber and calls her friend to rip apart De’nice who has bailed on the day. Meanwhile, Brad picks dirt out of his nails with his house key and stares at passing females. It’s suburban bliss.

They arrive at Crown and Brad goes to pay the driver with fresh pineapples he is stocking in his wallet. Chrissy explodes, “IT’S AN UBER HOW MANY TIMES DO I HAVE TO TELL YOU”. Jokes on Chrissy, Brad just wanted the driver to see his wad.

Maybe its the Bundaberg or maybe the gear, but Brad decides to “drop and run”. He lets out a dirty bum-grunt and giggles as he gets out. “Oi Chrissy, I farted in the Uber HA”. You sure did Brad, gooooood one.

They enter their beloved Crown and snake through the usual collection of cougars, Asian tourists, roid-heads and of course, a decent peppering of bogans who sorta look like they are dressed for the races.

In true Australian fashion, the pair head to the bar before greeting their friends who are sitting outside chain-smoking darts and yelling in that nasally way that bogans like to communicate.

Chrissy gets a “SAV BLANK” and Brad purchases two Bourbon & Cokes. A decent way to get a party started. They join their friends who are now loudly swearing and drinking at an unacceptable pace.

Brad politely interjects, “oi shut up everyone, haaaaapy birthday to you…” Brad’s voice sounds like a cigarette doing a Jimmy Barnes impersonation while getting run over by a lawnmower.

The evening is getting on and the group are well pissed. Chrissy decides it’s time to eat. Of course, given the gear in her system, this is just a macabre charade. An attempt at appearing like someone who isn’t on gear.

The waiter brings over a couple of serves of chips. Chrissy pretends to enjoy one while her non-sharded friends go apeshit on the bowls. The scene is comparable to the cow getting lowered into the Raptor cage in Jurassic Park.

Brad looks at his princess while she scoops the mayonnaise that missed her mouth and ended up around her face, “my angel”. He then gestures towards the gents.

They get the job done and then go and blow next weeks rent on the gaming floor. A magical evening.