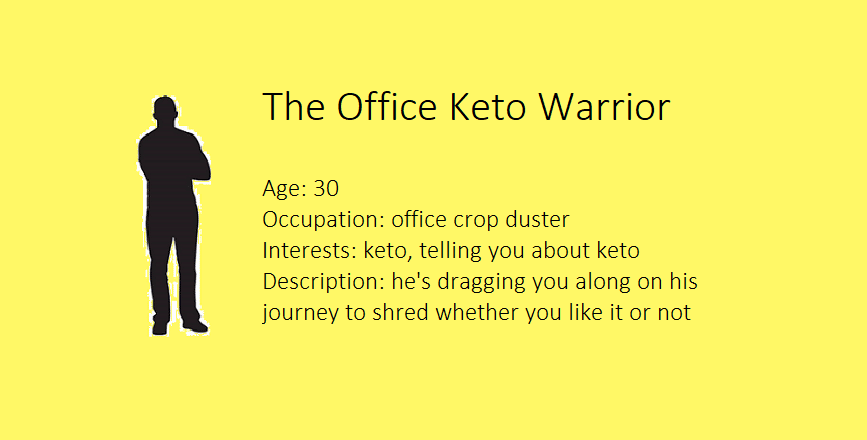 Todd knew some changes had to be made when his sister’s newborn made a play for his supple manboob when he first held him. Turns out, his steady diet of pub lunches and pints was rapidly winning the war against his ageing metabolism.

Never one to incorporate any form of chill into his brash life plans, Todd decides to fully devote himself to the church of Keto after googling “how to get shredded” while passing another Chicken Parmi baby in the work toilet.

His work colleagues noticed an immediate difference in Todd during his first week of the diet. Instead of giving steaming hot takes on the weekend’s sports fixtures he was bailing people up and telling them how good he feels after eating 15kg of meat for the week.

Alas, a steady diet of meat, eggs, fish and a few token veggies have turned Todd into a hallway cropduster of stomach-churning proportions. He stews proudly in his eye-watering aroma, “that’s the old Todd leaving my body, mate”.

It’s Friday, so the team is going out for lunch. Todd sees this as a perfect opportunity to rub his Ketogenics in everyone’s face, “hold up, let me just check the menu, I’m actually doing Keto so I’ve gotta make sure I can eat something, otherwise I’ll just reheat this tub of tuna & mayo, it’s about high fat and low carb, you see”.

No one cares. Nor do they care when Todd hijacks the entire lunch to talk about him coming down with the dreaded “keto flu”. After making sure the waitress understood his demand for NO chips with his two steaks for the 4th time, he continues, “see my body is switching gears…”

Each unsolicited update about his extreme diet is followed by a waft of keto-breath that could curdle milk. However, he’s dropped 2kg in his first week and despite what some might say, that’s not related to his increasingly severe state of dehydration.

A little fact his mates pick up on during after-work drinks. He’s only drinking straight whiskey and is still pissing more than a watersports enthusiast on their 10th beer. Again, he dismisses this disturbing level of lizard drainage as “the old Todd leaving his body”.

After two months of the diet, Todd has dropped 5kg but has gained about 25kg of unwanted ego. Now he’s waltzing around and patting his mate’s beer bellies and telling them they need to get on Keto if they want to be less disgusting.

Heaven forbid you eat a sandwich around him or you’ll hear about the evils of carbs for the next 30minutes. Likewise, opening up Instagram is fraught with danger as you’re likely to stumble across one of Todd’s daily motivational updates featuring another gym selfie of his slightly smaller rig.

What his friends don’t know is that Todd is harbouring a dark secret. He’s balls deep in the keto-plateau. He hasn’t managed to see a drop on the scales for 2 weeks now. He never thought this could happen to him.

Spruiking Keto had completely replaced his personality for the past 2 months and now he was losing faith in his fad diet. He’s as lost as a Hillsonger on his wedding night. He puts on a brave face but his mates can tell his heart just isn’t in his intense, fad diet ranting anymore.

Not to worry, he’s been reading about this great diet called Paleo. He gets to eat like Fred Flintstone with a life expectancy of 30 and take advice from a bloke who advocates staring at the sun. What could go wrong?