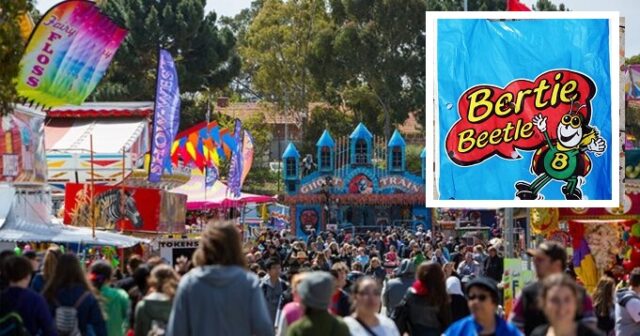 The Perth Royal Show was originally an event that showed off the best of WA agriculture, but now it attracts a different kind of livestock as bargain hunting bovine descend upon Claremont for the biggest day on the bogan calendar.

Getting there is simple, load up your AU Falcon with your didn’t-pull-outlings and join the outer suburban convoy to the leafy burbs.

You can pay for parking but a true Showsman will creep the streets of Claremont and cause residents to die of disgust at the thought of a shitbox parking up on their verge. Or you can catch the train; again be warned, as it will be crawling with more sticky children than the Neverland Ranch.

Once at the gate, you will witness the eternal battle between a bogan’s desire to go to the Show and the price they consider reasonable.

Despite knowing exactly how much it costs and making the decision to go, it is customary to make a giant arsehole of yourself at the gate as you accuse the 16-year-old at the booth of ruining your kids day with their exorbitant prices. It’s the way nature intended it.

If you’ve got a strong stomach head for the rides. If paying $10 – $20 for a ride doesn’t make you feel a bit sick then walking through the chunder corridor certainly will.

See, rides are essentially vomit inducement machines and will make kids recreate the exorcist after succumbing to the unholy triad of sugar, dagwood dogs and high velocity. Combine that with the signature scents of the carnies.

Ah yes, the carnies. A motley crew of ride operators and swindlers that love to foster a foreboding sense that knife crime could pop off at any moment. Nevertheless, it’s tradition to embarrass yourself at a sideshow game you know is rigged.

If you do manage to beat the odds then you will walk away with a ridiculously impractical giant toy that will burden you for the rest of the day. It will soon become your plush prison.

If angry farmers yelling at undisciplined children is your thing head to the animal tents. Marvel at livestock that is unaccountably better looking than most attendees.

There are plenty of opportunities to see your loved ones get spat on by an Alpaca or camel and ultimately the stench of manure will be a welcome break from your missus who is probably sweating like a bus driver taking a shit.

Next up you should indulge in some show bags. You’ll want to get to the Bertie Beetle stand as soon as possible as the fun-Gestapo have been known to impose limits per customer.

Watch in horror as Colgate dodgers demand to know why the bags are now $3 and why they can’t blow an entire Nimble loan on as many as they can carry.

All that’s left is to watch the fireworks. You’ll appreciate the big bangs because that’s the only time when you won’t hear the unmistakable chorus of randy bogans embarking on a 3 knuckle thrill ride on the grass. That’s Amore.