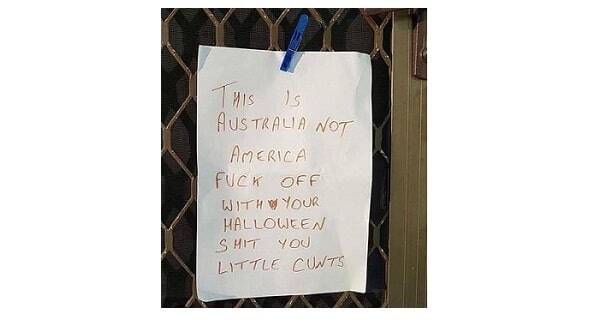 It doesn’t matter who you are, there is something to get offended about this Halloween for everyone. Here are some cute ideas for those who are fans of screaming their opinion into the dark abyss of outrage culture:

Trick or Treat – How will your baby ever cope with the societal pressures of being offered a phallically masculine Boost Bar, when it may be his choice to enjoy a more feminine Cadbury Dream, and damn, what if the lollies contain GMOs, gluten or sugar?

Not on your watch. Do a round of the neighbourhood and hand out recyclable bags full of mung beans or whatever the fark it is you eat.

You know all about tricks. Like those so-called “doctors” telling vaccines work or those certain regulatory bodies telling you that your 2-week course in holistic medicine doesn’t authorise you to doll out medical advice on Facebook. Be on high alert, big pharma is trickier than working out a mate’s microwave after a big night out.

Judging Girls Showing Some Skin – The one thing that unites us all, from leering larry to hardcore feminists, is that it is totally fine for girls to dress like the stripper version of anything on Halloween.

he entire world is on board with a little T&A, except you, of course. Oh no, these stunning lean Fillies remind you of the short-haired Shetland Pony you have become, forever chewing the bitter cud of jealousy.

While you stagnate in your outdated pond of modesty shoot them the ocular spanking their fathers never gave them (before their daddies do for real).

America, Hell Nah! – Despite Halloween’s origins stemming from Celtic traditions, you should make it clear that you will not tolerate any “American shit” in your backyard. Except for the Ford that is literally in your backyard, and Netflix, and half the music you listen to, and all those naughty movies you watch in the portable toilet when you should be working. Look, apart from all that shit, NO American shit.

See, America has seeped into our “culture” like the precum through a young liberal’s grundies. So, if you take an aggressively anti-American stance on non-American tradition, you might come off as a bit of a simpleton.

Outrage Over Costumes – It’s an absolute certainty that an outrage storm will erupt over some bogan’s insensitive costume. So why not spend your weekend joining in and getting a little taste of moral superiority. Start an online petition! Scorch their earth! Be the change etc etc.

Who knows what you’ll see at the buffet of bad taste costumes this weekend – sexy Ivan Milat, a saucy coronvirus or whatever else the degenerate mind can think of. Now you might not be wearing a costume but you sure as hell have a cape on – so go get ’em, tiger.