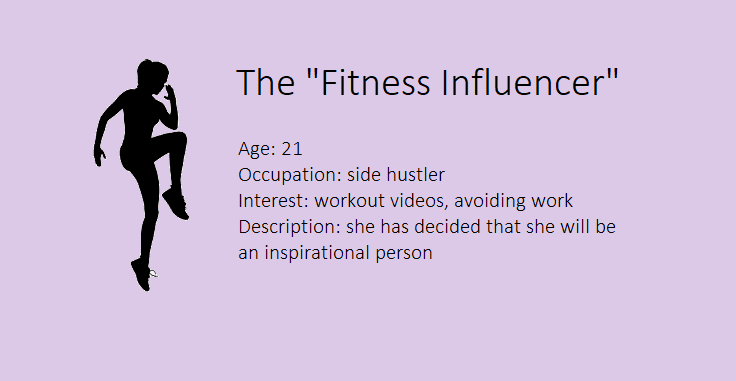 Jesyka’s life changed forever when she met a walking anabolic steroid at the Lookout a few years ago. She’ll never forget the workout videos he showed her of himself while he was chewing his face off like he’d overdosed on PCP.

She wildly assumed he was a “sponsored athlete” because he posed with a Musashi protein shaker in every photo. Naturally, he did nothing to disabuse her of the notion either. Ultimately sending her a 3 am digital peen polaroid with the shaker for scale, “got, protein?”

It was at that point she knew she could be a winner too. She quit her job at the local car dealership, signed up to a Jetts gym membership and officially started building her empire as boss bish @ her “side hustle”.

It’s unclear whether an unpaid hobby while being unemployed counts as a side hustle but when you live with your head amongst your polyps, what’s the difference, really?

She had well and truly decided that she was now an inspirational person. After all, she went from being unemployed to posting videos of herself performing basic exercises at a gym. That kind of rapid success would even give Elon Musk whiplash.

Her entire “business strategy” was stolen straight from Baker’s Delight – hot buns sell. So she made sure all her videos were buttocks focussed. This created an insta-Oasis that attracted the thirsty from far and wide. It also helped hide her lack of training and frankly, abysmal form.

To accompany her videos, she channelled her inner Confucius and started rattling off unsolicited life philosophies that she’d largely plagiarised from fitness memes. She was no longer a mere e-trainer she was a life coach too.

Her commitment to the game was unparalleled. As demonstrated by cutting her night early to swing by Jetts at 10 pm on a Friday. She double-checked her fitness selfie make-up and get a neanderthal to take a photo of her at a squat rack

It would only be a matter of time before the brands she @ in her captions took notice of her. Not to mention the 2000 followers on TikTok from posting painful lip-synching videos twice a day. Her male fans assured her she is very funny.

She knows that a superstar is nothing without her fans and in her case quite literally. If it wasn’t for the monthly feet videos she sends some dude in Dubai she might actually have to get a job.

Nevertheless, the road to influencer success is lined with subscriber-only feet content – the way nature had intended it.

There comes a time in every ageing art teacher's life when they decide it’s time to evolve into their final form and rock a...

Stressed Worker Takes Day Off To Enjoy Relaxing Meltdown On the...