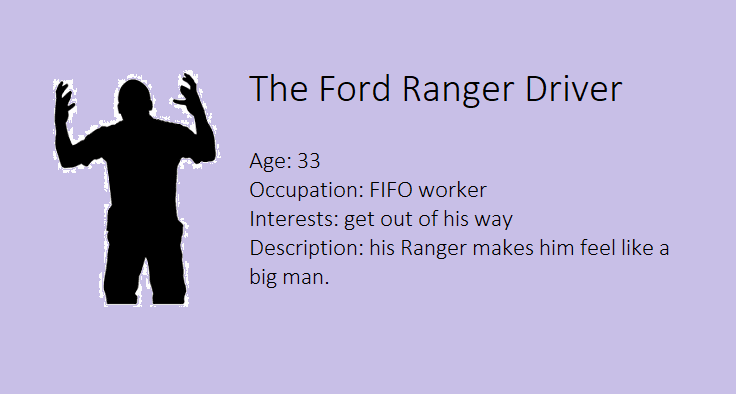 Jarren charges towards the ensuite in his latest temporary lover’s room and boots in the door like he had a warrant. There was no time to fark about with doorknobs when the 6 consecutive days worth of Hungry Jacks Tamer Boxes were vying for freedom.

A cockroach that can’t handle the smell makes a break for it. Only to get caught under Jarren’s barefoot. He smears it across the floor. This isn’t just pest control, it’s a metaphor. He’s a Ford Ranger driver and he’ll crush you like a god damn bug.

He’s careful not to wake his sleeping beauty so he skips a flush or a rinse. He scribbles some sweet nothings on an old TAB ticket and leaves it on her bedside table, “COIN 4 MORNING AFTA PILL”. He gently leaves some shrapnel next to it and heads to his beloved Ranger Raptor.

He pulls out onto the road and forces an oncoming car to slam on its brakes and veer into the verge. This is the second poorly executed pull out for the day but Jarren couldn’t be happier.

You see, Jarren only truly feels alive on fly-out day or when he’s driving like Immortan Joe double banging two cans of chrome on his way to Valhalla. He readjusts his white Oakleys on and heads to Bunnings for some supplies to build an octagon in his backyard.

This wasn’t going to be the only time Jarren asserts his dominance today. As naturally, when he’s not cutting people off without indicating he’s so deep in their shit that he makes an intestinal worm seem like a polite guest.

Every dog act is accompanied by a colourful hand gesture of his choosing. It’s not enough to simply drive like a meathead, one must make the other driver genuinely fearful for their wellbeing. That’s the Ranger credo.

There is just one thing that Jarren cannot abide by and that’s someone in a “low testosterone” car having the audacity to do the speed limit. He didn’t step up to the plate of Ranger ownership to let people disrespect him like that.

He arrives at Bunnings and notices it’s busy. He can’t risk someone parking next to him and scratching his paint job. Only one man scratches his paint job and that’s him driving through bushes to avoid a booze bus at 2 am.

Accordingly, he parks across 3 bays including a disabled bay. He jumps out and a passing punter can’t resist, “real considerate park there, mate”. Little did he know he just made Jarren’s day.

Thinking to himself, “what would my Ranger do?” Jarren starts revving up, “do you know who you’re talking to mate?” His intensity has caused the man to back down however this isn’t over yet. One does not simply disrespect Jarren in front of the rig giving him exhaust burns on his weenie each night.

Channelling the American automobile further, Jarren menaces the bloke by following him around Bunnings. He abruptly pushes past the man to get to a packet of screws, “get out of the way, hero”.

Eventually, it boils over in the outdoor BBQ section when Jarren tries to run the man off the aisle and into a smoker. It takes 4 staff members to rescue Jarren from an impressive headlock that choked the churning engine in Jarren’s masculinity as he begged for more oxygen intake.

He swiftly leaves the store somewhat concerned that he might be getting impounded for biting the bloke’s hand during said headlock. Nevertheless, Jarren feels that he won the fight and proved his point. Whatever the fark that is.

RELATED: Ranger Driver Stripped of Raptor Badge After Letting a Motorist In