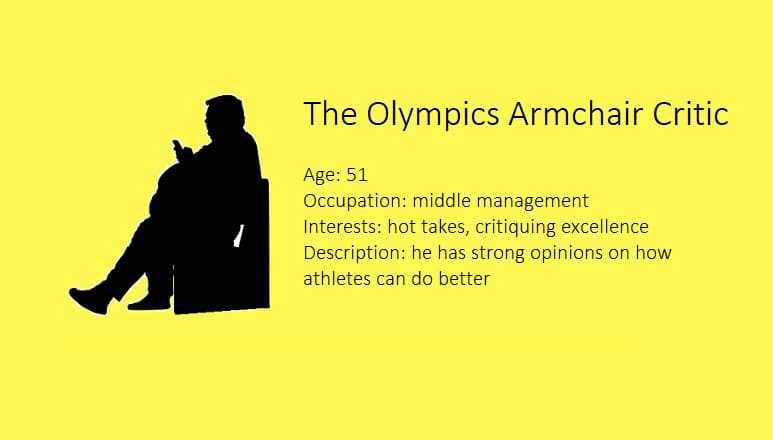 Some say if you head to the hallowed turf of the Bull Creek Primary School oval you can still hear the cheers as Rob ran a 16.8 second 100m to secure 5th place for this team in the medley.

Having reached such dizzying heights of athleticism, Rob never felt it necessary to slip on the New Balances of excellence again and coasted on the memory for much of his adult life.

It’s that 100% self-assurance that he’s a GOAT that makes Rob such a devastating Olympic critic every 4 years.

One does not simply, half watch 15 minutes of each event and not become highly in tune with the nuances of each obscure sport. This expert level of knowledge gives Rob the confidence to deliver takes hotter than a yewww-pipe on UFC fight day.

Rob is currently off work as he strained his neck passing out awkwardly on his couch after 12 Tuesdee night bevvies. That’s the price you pay for maintaining such a highly tuned performance rig – somethings gotta give.

He starts his day with Australia’s favourite sport – swimming. As it happens, Rob knows a thing or two about aquatic brilliance.

Anyone who has seen the speed he moves through the water of a Balinese infinity pool to get away from the shart-patch he created can attest to that. His speed, size and busy hands have even earned him the nickname, the groper.

Chicken Twistie dust dances magically in the morning sun as Rob begins his first tirade of the day, “you call that a tumble turn you absolute farken muppet? You absolute hack, you farken loser”

He jumps on Facebook to let everyone know he wants a full refund of any of his tax dollars that went towards AIS funding. He expects gold dividends on his income tax investment in his athletes. He OWNS them.

He gets so fired up screaming about the lack of defensive pressure that he has to crack a 10:50 am beer. Hey, it’s 11:45 am somewhere he thinks.

2 tins of canned ravioli do little to stem the tide of his pre-noon liver tsunami. By midday, he’s soviet drunk – hammered and sick-all over his shirt. Someones gotta represent Russia in these games.

He switches on some gymnastics to play a little pocket billiards too. He’ll finish the job to some beach volleyball later. He just wants to get the balls rolling.

While fantasising about some eastern block honey sticking a perfect landing on his love vault, he catches wind of Simone Biles’ shock exit. Needless to say, he doesn’t burden himself with any facts before forming a very strong opinion on the matter.

He decides to share his thoughts in the comments section of some FB news articles,

“WeaKA AS PISS!!!!! Wen u represent ya country u have to show more ticker thn that lol… oh pressure boohoo have a glass of concrete and HARDEN Up princes,,, id be wanton all my tax bucks back spent on trainin her if i was a seppo”

Ah yes, the very same man who had to go on sick leave for “emotional stress” instead of facing a workplace harassment allegation against him. That’s the kinda man who knows about pressure.

Not willing to pump the brakes on the cunto-express, he doubles down on his comments,

“Good riddance neway.. Only cos its the WOKE olympics that any1 cares aii… her routine on the balance beam is pathatic… shiit mount, weak jump u call that 180 degree split??? HAHAH pisssoffff… totla loser”

Words can’t explain how pleased he is with himself so he moves onto the Table Tennis to bellow racial nothings at the dominant players. His happy place.

Documenting the Human Zoo is hungry work, so if you enjoyed what you read how about buying Belle a can of ravioli, ay?