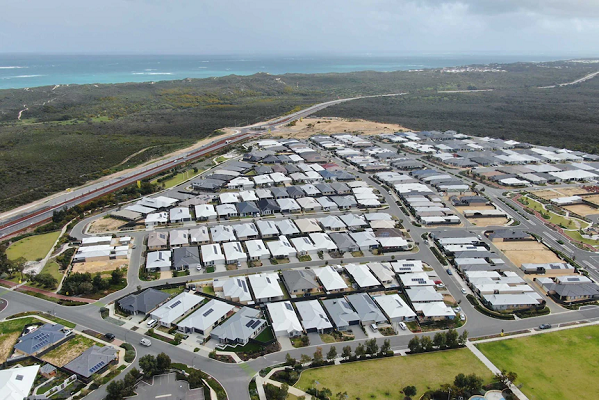 Suck shit, Sochi, Russia – Perf is now believed to be the world champion at urban sprawl. From Two Rocks to Singleton, this bad boy stretches along 150km of coastline. Stick that in your cabbage and smoke it, Putin.

It’s a time honoured Perf tradition to buy some land as far away as you can and then hate your life due to your 2-hour commute every day. In addition to this, you’ll rue the lack of amenities and public transport. Despite never intending to use the public transport system a day in your life.

Nevertheless, why build tall when you can sprawl, baby? It’s a question that Perf has grappled with for decades. Of course, the boffins will tell you it’s to do with the affordability and the desire to snare a bit of land by the coast. All true but is there more to it?

When one looks at our Northern sprawlers we quickly notice that English ex-pats can’t get enough. Why you may ask? Well, by 2050, urban planners predict the Northern sprawl will reach so far that British residents will actually be neighbouring their beloved homeland. Lubbly jubbly, best of both worlds to complain about.

Similarly, as WA waits for its next boom, FIFO workers can dream about the day they can afford a cheap bit of land that offers outer-metro prices but also allows them to walk to work in the Pilbara. WIWO is the new paradigm and at this rate, it won’t be long until it’s a reality. No more K-Town rent.

Likewise, our Saffa friends feel at home amongst the vast, undeveloped bushland of the mighty Perfahari. This reminds them fondly of all the highly embellished animal encounter stories they love to regale Australians with.

Of course, the animals they encounter in Two Rocks have decidedly fewer teeth than the beasts they shoot for trophies back home.

To the South, there is a different situation emerging. See, the North has practically unimpeded growth until Geraldton (which will have to be dealt with in due course, lest people want Gero residents coming round to borrow some “sugar”). However, the South has a much closer, a much greater threat – the mighty metropolis of Mandurah.

Being a proud, war-like City, it is unlikely Mandurah will ever allow Perf to swallow it up in its never-ending hunger for Southern sprawl. Alas, Kiwi resident will get no closer to their beloved long white cloud.

Eastern sprawl is an entirely different block of chooks. As it stands, the metro area extends east to The Lakes. However, one does not simply take up a Perth Hills lifestyle willy nilly.

These hills have eyes and should you not have a comprehensive grasp on the bylaws you may feel the wrath of some hobby farmer’s air rifle. Live by the bylaws, die by the bylaws.

Or land seekers worry they might stumble across a plantation they shouldn’t have and spend the next hours getting hunted like John Rambo through the unforgiving bushland. It’s a vibe, tbh.

Is there anything stopping the sprawl train? Well, no. You see, anyone living in the desirable inner-city suburbs will NIMBY the living shit out of any attempts to develop upwards. This NIMBY attitude spreads far wider than just the inner city and basically will make life a pain in the arse for developers.

No one’s putting up a fight over another “lifestyle estate” in the North, after all.