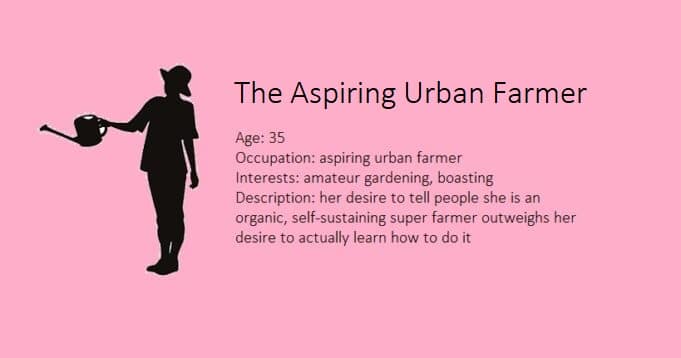 Since deciding to fill the existential void of millennial existence with amateur agriculture, Sara has committed more atrocities in the garden than Don Burke.

They say preparation is the key to success and Sara knocked it out of the park by watching several episodes of Gardening Australia in the lead up to maxing out her credit card at Bunnings.

Her long suffering partner will remember it as the spring of discontent. Bi-weekly trips to Bunnings to pick up garden beds, racks, soils and an ambitious collection of seeds that she expected will sprout a mighty bounty of prize-winning produce.

All the prudent advice was to start small and learn the ways of the garden first. Sara however had no time for such a learning curve. She had already started blabbering on social media about being a self-sustaining household.

Accordingly, she would accept nothing less than a complete replication of the Bunbury farmers market in her tiny backyard in a matter of months. After all, the promise of boasting about not going to a supermarket was about all she had left in her life at this stage.

Alas, the monster inside of her grew far quicker than the fruits on her sickly looking plants. Now, she was posting photos of nubile tomatoes and writing lengthy posts about her home agriculture philosophy and giving unsolicited advice on how you can also break free from your shit-shackles and blossom into a mighty urban farmer like she was.

She had also reached the stage of judging other people’s effort. Especially the plebs at work who loved to share their kid’s Woolworths’ Discovery Garden efforts on Facebook. Her thumb was greener than Gumby’s proctologist and took great delight in offering “feedback”.

“Oh, you probably aren’t giving them enough light! Also, I’m pretty sure the slow growth means you’re underwatering them but it could also mean you are overwatering them, I never have that problem with my bok choy, guess I just have the right touch *giggles shiteatingly*”

In reality, this was like taking babysitting advice from Ghislaine Maxwell. What she failed to tell everyone was that her backyard was looking as depleted as tooth enamel at a British smile party.

Not only did the backyard give off big Chernobyl vibes but her failure to get the insects under control gave the scene a real outback long drop kinda feel. Needless to say, this didn’t sit very well with Sara and she’d based her entire personality on this goddamn veggie patch.

Like a mummy blogger, she didn’t see her creations as grotesque, she saw them as beautiful and would gladly post photos of her vege-tumours on social media with a spiel about how much BETTER fresh food is – even if half of it has been marinating in her partner’s piss given his belief every plant is like a lemon tree.

This is true, if you can put the insect infestation she cut out behind you as you try to enjoy yet another bruschetta made from Sara’s tomatNOs. Even better, however, is the fact that you can no longer invite Sara around with getting the gift of unpalatable produce yourself.

Go on, have a crack at what the snails didn’t finish off. It’s better than being a sheep and going to Coles right? The jury may be out on that one, Sara. Might help to learn the basics before carrying on like Costa.