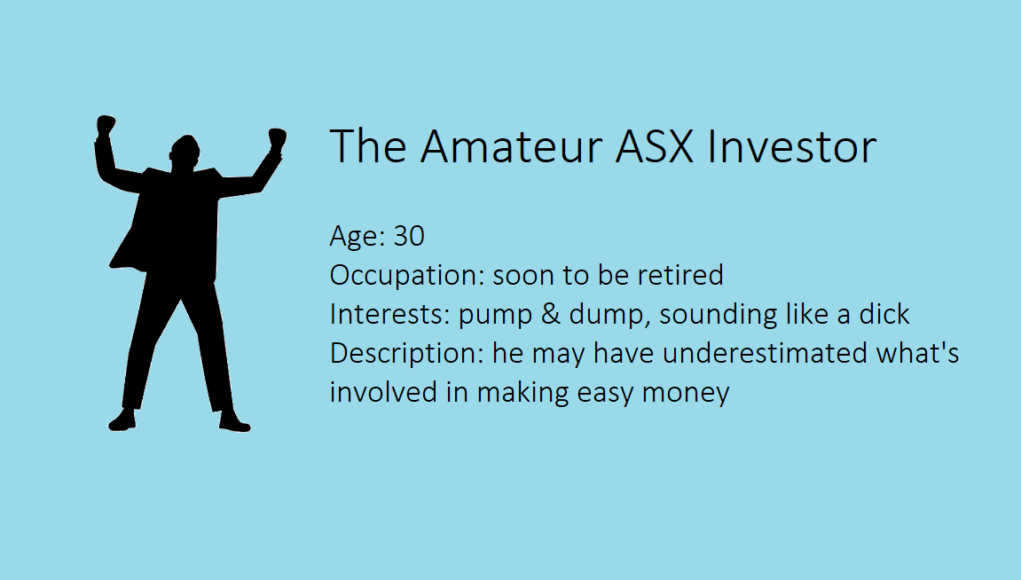 Up until a year ago, society held so much hope for Jack. He had worked hard, saved up a respectable deposit and was about to pull the trigger on his first investment property. However, one fateful trip to Sydney changed everything.

He spent a weekend with some acquaintances that had evolved into slimy stock-bros with the help of their trust funds, insider trading tips from their dad’s mates and of course, more lines than a geometry textbook.

He returned to Perth infected with a potent strain of douche-id 19 and decided to act on his coked-up scheme to double his housing deposit by utilising the 48 hours of stockbroking advice he can barely remember.

It wasn’t just Jack who thought they were sure things, an entire community of Facebook investors reckoned it too. Accordingly, he swallowed a big load of speculation when a dude posted a hot tip about a small-cap goldie that was due for a bonanza hit.

Jack knows that one does not simply ignore a man who claims he owns a Ferrari and has a Warren Buffet quote in his cover photo. Money can’t buy that sort of financial advice so he decides to drop $25k on the stock.

For the next week, anyone who meets Jack is treated to an intense rant about how he’ll pump & dump his way to a 200% return in just a week. He shows people charts that he doesn’t understand as proof that he knows what he’s doing.

He takes any criticism of his “investing strategy” poorly and writes off dissenting views as the cowardly whimpers of broke losers. His fantasies remained unpolluted by the unpleasant discharge of reality.

Like a bovinophobic matador, nothing was stopping this bull and Jack further cemented his status as a legendary trader by making $90 on FMG. He proceeds to lose a further $2k on some clumsy day trades on tech stocks.

Days pass and he’s beginning to get the impression that listening to random blowhards on Facebook wasn’t getting him any closer to his goal to be retired by the end of the month.

To make matters worse, he begins to see the sentiment on HotCopper change in regards to his bigger play. More and more people begin to interpret a few days of poor trading as an indicator the company isn’t going to deliver on their much anticipated results.

Rather than form a balanced view he begins blocking bears like he had a nasty case of hemorrhoids. After all, who has ever lost money on a sure thing? He calms himself and weathers the storm. He cheers himself up with a FB post talking about Tesla being overvalued according to him. He isn’t at all bitter he missed the boat.

Finally, his day of reckoning arrives. An ASX announcement drops and it turns out there is more gold on the average Rockingham hoodrat’s chain than in the drill results. Oh lawd- the only thing that drops sinks quicker than his heart is the stock price.

He loses his shit on the ASX investor group page until a bloke with a photo of “his” Rolex as his display pic eases his mind, “just buy the dip bro”. Jack is back, baby. He sinks another $10k into the stock without doing even a single minute of further research.

What could go wrong?