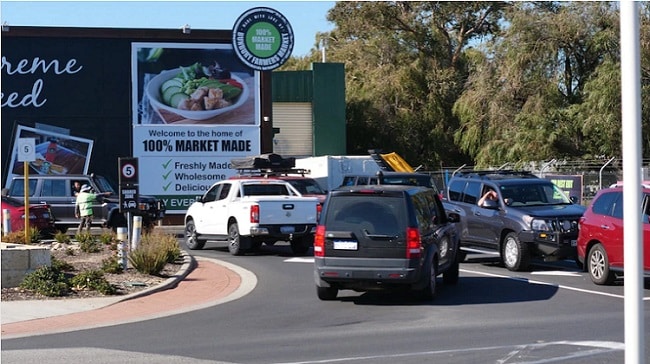 After the trauma of the Easter holidays, Simon was ready to walk away from the world of parking attending but after his vague plan to get a job on the “mines” fell through he found himself back in the line of fire.

Only 20 minutes into his shift yesterday, Simon was about one more fly landing on his lip away from a total meltdown. It’s the last day of the long weekend and the majority of Perth bound 4WD’ers were carrying on like a pack of Pajeros.

Another attendant working with Simon told The Bell Tower Times,

“I checked up on him and he’s already got that 1000 yard stare. You can tell he’s seen some shit. This isn’t his first rodeo. Some say this line of work leaves a mark on a man”

“I pulled him aside and told him if he doesn’t drift away to his happy place soon he’s going to rip off a MaxTrax and ram it up some Ralph Lauren wearing toff’s arse. Naturally, we’d all like to see it but Simon really needs that pay coming through”

We spoke to Simon who was in a state of shellshock after copping a 5-minute spray from some Turbocharged cheesedick about why there isn’t more parking. He told us,

“Does this guy think I own the Bunbury Farmers Market? Does he look upon my HiVis singlet and think, oh look, that’s the guy in charge of infrastructure in Bunbury? Man, I think I’ve got the red mist”

His demeanor turned from agitated to unsettling numb real fast and it was more than a touch disconcerting. It was difficult to know whether Simon has indeed gone to his happy place or somewhere much more rotten.

“Yesterday some dude in a Cayenne threw his keys at me before handing me a $10 and told me not to scratch his car. I don’t know if he thought I was a valet or just thought he could buy me for $10…”

The water of Simon’s patience was slowly bubbling away, mere seconds away from a rolling boil. He stopped himself after taking a deep breath,

“Do you want to know what my happy place is? Thinking about each and everyone of these people getting a speeding fine on the way home. I like to think about that. A lot”

Just like that, the lid to Simon’s hurt locker was jammed shut again. Luckily for society, he won’t be rummaging around in it today.