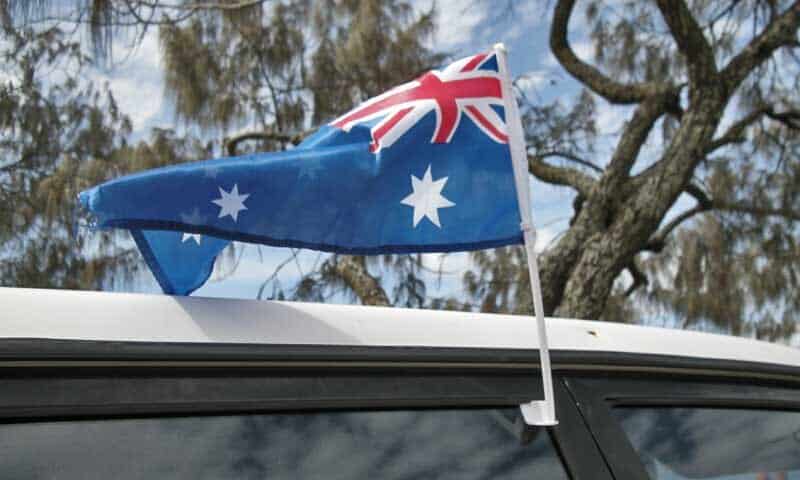 Normally, Traylin lets his full back southern cross tattoo and view obscuring collection of unwelcoming car stickers communicate how he feels about his beloved land down under.

However, from around mid Jan, he likes to wack some Chinese-made Aussie flags on his car and lets them flap patriotically until they dislodge and end up down a native bird’s throat or wherever he can’t be bothered picking them up from.

It was undeniably a patriotic display and what is more patriotic than a couple of $2 Chinese-made Aussie flags attached to your internationally manufactured car?

Traylin is relatively progressive in bogan circles and doesn’t celebrate Australia Day perse – he celebrates Australia Week and is currently on the first day of his Aussie pride bender. He told Times,

He paused as his face started to resemble something that would raid its own nest for a feed,

“You’re meant to say Oi, Oi, Oi. Anywhere, anytoime. Get that through ya head. How good are the flags on me car. Last year they lasted until about September”

We asked Traylin why he didn’t just keep the Aussie flags up year round if he was so attached to them,

“Straya Week is like me Christmas, bloke. We all love putting up the chrissy tree but it means more if ya wait for the right toime. Here get this in ya”

During Straya Week, Traylin also opts against wearing a shirt. Instead, choosing to show his pride with a larger Chinese-made flag that he wears as a cape with two Chinese-made Aussie flag stubby holders are bracelets.

Attempting to unpack the look, we questioned whether Traylin saw himself as some type of crusader. He was very quick to confirm that,

“Oath, ken’oath, bloke, a Magistrate once said I had an aggressive and misguided sense of national identity aha, book-poof talk for being a sik kent I reckon. He also called me jingoistic or someshit, told him if he said that to me at the urinal I’d go him, robe or no robe”

Well, that explains a bit. You can catch Traylin down at the Rocko foreshore all week. Just make sure you don’t have a staring problem because he’s feeling pretty peppery this time of year.