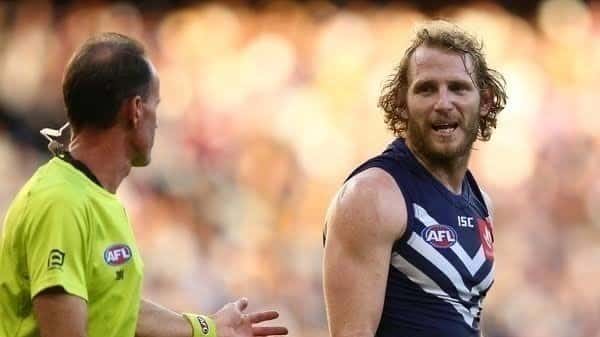 Dean Margetts’ final game as an AFL umpire has been tainted after he was unable to give the Eagles that winning edge to get up against an inspired Dockers’ team.

Prior to today’s shamozzle, Margetts was in line to join a distinguished list of men who have helped the West Coast Eagles achieve excellence throughout the years.

All one needs to do is follow a Docker’s supporter on Twitter or Reddit to understand the profound impact Margetts has on the Eagles’ game plan.

“the meth COKE eagles always have an extra player on the field when Margetts is umpiring. Just look at the number of free kicks he awards his beloved wet toast BUDGIES compared to other teams”

At that moment, Dave pulled out a mobile phone covered in pastry flakes & sauce and presented a meme apparently showing statistical proof of his claims, “see? what a dog!”

An unofficial source from the West Coast camp told us,

“There was a few of us shooting Margs that look, the ‘cmon mate’ look. No one is really sure what happened today but let’s just say an ancient, unspoken bond between Margetts and the Eagles was broken. Pretty sure Simpso cancelled the after party for him too”

Sources close to Dean still maintain he did all he could to help sway the pendulum towards a West Coast victory but ultimately, a Freo’s draft pick side was too strong for the seasoned Eagles.

It can’t be confirmed but he was heard saying, not even Jesus could turn that watery piss into wine.

Dockers fan’s are expected to celebrate this victory for the next decade. In the hearts & minds of all Freo supporters, they have broken their Grand Final drought.