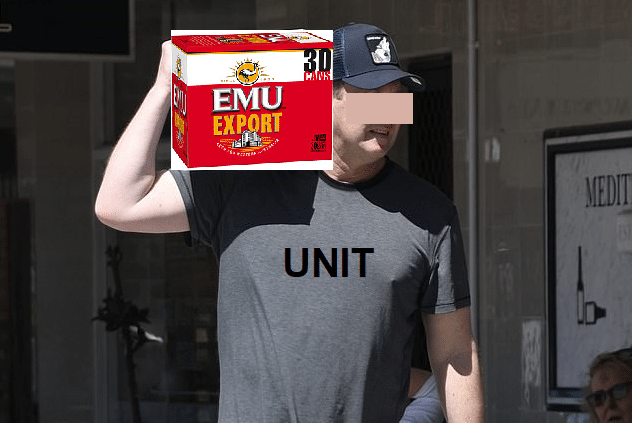 The correct way to carry a heavy block of bush chook has tormented mankind since the creation of froffs. Especially when the southern cross tattoo came into the picture. That changed everything.

Drawing some kinda inspiration from African tribes seeking water, the Australian bogan has learned that weight seems to be distributed more even when the heavy object is raised, albeit, to one side.

Accordingly, carrying a block on your shoulder has become the go-to of every alpha south of Canning and North of Powis. City slickers probably get their grandmas to carry their carton *laughs Hiluxy*.

One might assume that figuring out how to carry a block in the most alpha way possible was the end of the discussion. Alas, it wasn’t.

What’s the point of soaking every lady’s undergarments within a 5km radius if they don’t fully dehydrate via the vagaroonie when they see your southern cross tattoo? Be it on your arm, your back, or your chest.

Accordingly, Curtin University crunched the numbers and found that the biggest issue facing blokes carrying blocks on their shoulders for long periods is the anxiety induced when they believe the “talent” can’t see their pièce de résistance.

“How does she know she’s my ride or diieee? She needs to see the tatt bro. She’s my queen and I’ll chip any foreigner who has the audacity to exist on Australian soil in her presence. Why even lug his heavy piece of shit home with me, I only train glamour muscles, bro, it’s a grind”

A she-turbo shared a similar sentiment,

“I need to know that a guy I’m going to get all sticky mouthed on is willing to go that extra level. I never pay for Taxis and I need to know the caveman walking through Scarborough is the kind of man to staunch the driver until he wets himself in fear”

A new age turbo from Mullaz Beach had a different perspective, however. Telling us,

“I want the sluzzas to know that I’m more than just a roided up shitkent with a sik southern cross tattoo across my upper back you know? So, I’m happy to carry that carton for her, she’ll see my ink eventually, it’s all good?”

Regardless, Curtin has found that 90% of men with southern cross tattoos fret about their visibility while lugging the payload on their shoulder.