Luckily for Benny boy, he has made friends quickly. See, his commerce degree comes second to his dexie supply business. He’s the Walter White of UWA, he is the one that knocks.

His new friends helped him turn his freshman status into legit status and signed him up to a number of drinking orientated social clubs. He had a fever and the only prescription was Frat Boy parties.

Just like that he went from the shocking social lows of TEE study groups to the dizzying highs of dressing like an American jock and dry-grinding his big man on campus fantasy to the taste of warm backwash.

He attended the Frat Party in attire that kind of missed the mark: Wildcats basketball jersey and a pair of brand-spankin’ Air Jordans that he bought just for the event.

He used his sister’s eyeliner to draw two lines under each eye and joined the sea of Americana-themed lads acting like reptiles. He measured his night out in red cups and has the vomit stained clothes to prove how much fun he had.

Its been weeks since the Frat Party and Benjamin starts a new day at uni by joking around with his “bros” on the grass, “I only bother showing up to lectures for the jugs after!” Like a society of socially abhorrent primates, the group howl a series of beer-related chants. Shame.

They still bring up anecdotes from the night and trade untrue hookup stories that never transpired. If they are being truthful, no one believes each other, but it is a delicate ecosystem of lies that benefits them all. One can’t just go disturbing that.

During a tutorial, one could easily be mistaken into thinking Benjamin was sponsored by the word “beer”. He sits next to a fellow fresher and gives her a taste of his varsity-influenced game,

“coming to the Bak 2 School party? A bunch of us are heading to the tav after this tute to discuss the game plan over some beers, you should come for a beer”.

She replies, “um I have to study this afternoon until late”. He misinterprets her lack of interest as being intimidated by a lad whose father lets him drink now. “Well if you decide to come, first beers on me, if I’m even standing by then! You should’ve seen how fuuuuucked up I was last weekend I…”

She drifts off into a hypnotic state of shock. So bored she might just die in that second. In a daze, she accidentally knocks her pen off the desk. He lets rip, “TAAAAAXIIIIIIIIIIIIIIIIIIIIIIIIIII”. 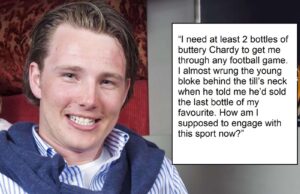