Dani spent 9 months slow cooking a little bundle of Facebook irritation. Her little angel’s day of birth marked the happiest day of her life, and the day she became an ISIS-grade Facebook terrorist. “Dani added a new life event: had a child”. An ominous prelude to the tidal wave of baby shit that was going to smear your social media Huggies.

Dani’s baby related Facebook carpet-bombing started off as a light assault on your care levels. A few posts a week showing her precious angel rolling around and acting disturbingly similar to how you conduct yourself while in the grips of some heinous hangover.

This was the infant calm before the baby storm. On a bleak Friday afternoon, Dani loses her fucking mind and posts a picture of her little munchkin’s shit stained nappy, “Oops little bubba made a mess haha xoxo #blessed”. Lord have mercy.

Everyone else’s childling is a bald-headed little piss pot, but Dani’s bubba is a supermodel, actor and comedian all rolled into one ray of sunshine that insists on glaring out your eyeballs while you try to drive down the road of patience.

After the shit-gate incident, Dani tones it down a bit and posts a video of her sprog crying like a teenage girl at Justin Beiber’s coming out party, “oh Mr grumpy bum is grumpy! haha, xoxox #NewBornThingz”. Watching the video is as enjoyable as a prostate exam from Edward Scissorhands.

Months bang on, and Dani’s Facebook posts start to turn sinister, “LISTEN, whether I vaccinate my child is MY CHOICE, and anyone who says otherwise can suck eggs – feeling angry :@ :@ :@”.

It is unclear whether the update was born in the pits of self-righteousness or plain ignorance; nevertheless, Dani has read some articles and by virtue of procreation is an expert on the subject – Dr god damn mumma in the house.

She proceeds to argue mercilessly with everyone who comments on her post. As it turns out churning out a placenta is equivalent to education these days. To further hammer home her point she screenshots any dissenting views and throws them to the wolves in her dumbfuck FB groups.

The winds of temperament change as fast as they gust, and within 2 hours Dani is back to sharing “totes hilar” baby memes from the cutest bowels of Facebook. If you want to experience the pains of childbirth, reading Dani’s page is a good start. 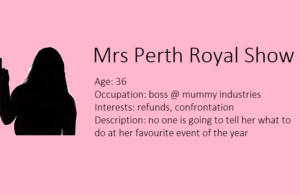 For the uninitiated, the Royal Show is like transporting the patronage of Sizzler into a petting zoo with overpriced rides and food so greasy...