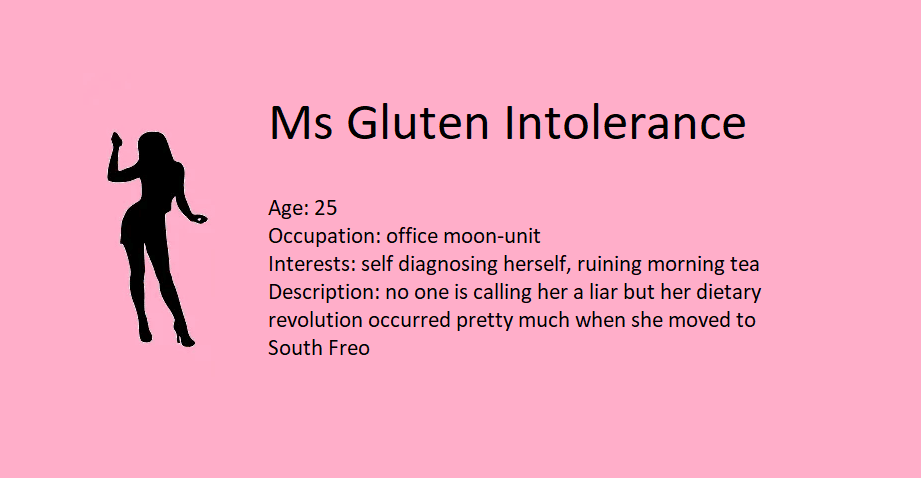 Many years ago, Celeste moved to the bohemian backstreets of South Fremantle. Her fiendish penchant for pingas and darts was replaced by Bikram Yoga and a new set of dietary guidelines.

It’s a sad story, she grew up with gluten, went to school with gluten, but now she lives in the wrong neighbourhood and can’t even be seen associating with gluten. Her stomach has no intolerance for gluten and proudly waves the flag in the face of anyone daring to not fit in to the enlightened dietary fad.

It’s Celeste’s Birthday and in the world of mid-sized accounting firms that means she is expected to bring in some morning tea for her desperate cohorts. The fat directors resemble vultures as they circle the kitchen at 8am waiting for Celeste’s offerings.

Right on cue, Celeste bounces in like a human pogo-stick with the self-satisfied smile of the culinary terrorist. “Raw, gluten-free brownies!!!” The bulbous bellied men look shocked and betrayed. Does this woman think this is a game? Morning tea is the only ray of sunshine in an otherwise bleak world of Nescafe instant coffee and stale biscuits of despair.

As is customary at Celeste’s workplace, the team goes out for a feed at lunch for a coworkers birthday. Celeste sends the group email out at 1030, “new vego joint in town!” She hits enter, and within 10 seconds she hears a man punch a hole through his own keyboard.

Celeste has deprived him of a sugary morning tea, and now she has robbed him of his chance to get a parmi and chips for lunch. The aggrieved fat-o-saurus flails his disproportionately short arms around in a fit of prehistoric rage, “bloody moon unit ruining my bloody day”.

Celeste perkily guides her team through the menu. Her enthusiasm is contagious in the same way Ebola is: you are most likely to contract it from the shit spewing out of her mouth.

Not content with ruining her coworker’s day, Celeste sets out to bust the balls of a dude she met the other weekend. Ignorant to her gluten free-chic fashion, he makes a reservation at a total gluten factory. Oh you arsehole, you should be hauled in front of the Hague and charged with crimes against glutmanity.

He looks on in disbelief as Celeste asks approximately 155 questions of the waitress about the exact genetic makeup of the menu items and proposing advanced alterations that even Heston would consider to be a sick joke. “Maybe I should’ve let you pick the restaurant”, he says. Yeh bud, this ain’t some bread scoffing slurry, she is precious.

He was foolish to think he was going to land his baguette in her bread bin with amateur plays like that. They part ways, and Celeste heads home to post circle jerk comments on gluten free Facebook pages while snacking on something that looks like a potato chip but is actual fact is made out of kale – a type of land seaweed that tastes like a compost bin. Yum.