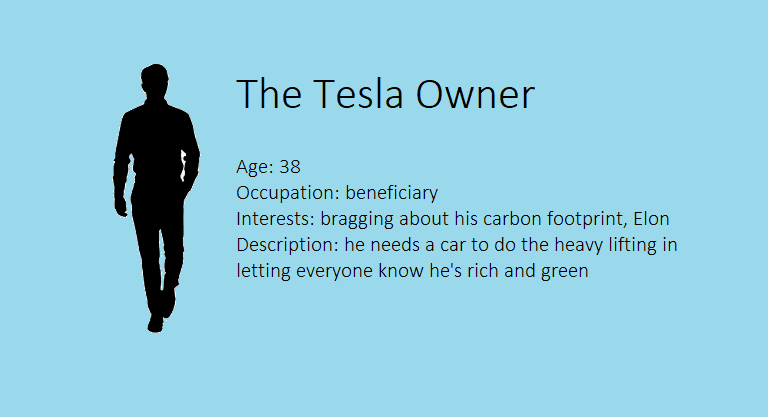 It’s remarkable how Deon developed an overwhelming environmental conscience around the same time his father handballed him some very generously priced options in one of the companies he’s on the board for.

Going against everyone’s advice, he flipped a bunch of shares and made $120k in a day. Not a bad day’s work for having the right genetics and agreeing not to tell his old boy’s third wife about the mistress.

Gazing upon his bank balance, Deon knew he needed to buy a car that demonstrated he was better than everyone on multiple fronts. So what better purchase than a Model S Tesla?

Not only was he single-handedly saving the environment from the very mining that went into developing his farkoff lithium battery but he was driving a status symbol on 4 wheels.

It wasn’t all smooth sailing though. A personalised number plate can only flex one of these newly acquired personality traits – master investor or Greta 2.0? NOPTRL, EVBOY, NOCRBN, BLCKCHN, MOONING, ASXSLYR It was a hard choice.

Ultimately, what was the point of owning a Tesla if he couldn’t carbon-shame everyone else who couldn’t afford a 100k second-hand Model S just like Deon. NOPTRL it is.

After waging a very aggressive social media campaign to raise awareness of his new purchase he decided it was time to make one of the biggest changes in his life.

He switched out the photo of himself holding a Dhufish someone else caught on a fishing charter in 2017 from his online dating profiles and uploaded a photo of himself looking whimsically into the distance while leaning against his Tesla.

Oofff, you have to hope every female aged 18-45 within 40km had water damage insurance because that whole radius just got wet.

It wasn’t long before an aspiring influencer agreed to go on a date with him. Partly because she was curious about the car and partly because she thought this was a pretty good chance to get some gram photos dining at Nobu.

Believing the puss should be naturally drawn to the Tesla, Deon opts against getting out of the car and knocking on her door and just summons her forth. As she approaches, he leans out the window, “could ya grab my jacket out of the boot, babe”.

Naturally, she walks towards the back. All part of Deon’s plan, “no silly, the front boot, this is a Tesla, doesn’t have a big petrol engine *winks reptillianly*” She lifts the front boot to see a few (empty) Gucci shopping bags and a bottle of the cheapest Cognac you can buy strategically placed next to his jacket.

Deon is positive that this tragic display has her lady motor revving under the hood. Which is a good thing as his Tesla doesn’t make much noise as he points out 5 times on his 30minute presentation on the automobile that follows.

By the time they get to dinner, she is starting to wonder if the Nobu shots are worth hearing about the self-driving mode, supercharging stations and that he’s all about 0 emissions. All-day every day, 0 emissions.

Alas, dinner takes a very nasty turn when Deon gets into her face over comments that she isn’t a big fan of Elon. He frankly wasn’t prepared for such a vicious assault on his lord & saviour.

After unsuccessfully trying to calm down, Deon’s temper goes from 0-100 faster than his Tesla. He blows any chance of company that night by launching into a 5-minute rant about how dumb she must be and that she doesn’t even deserve to set FOOT in the FUTURE.

As she leaves in an Uber, Deon consoles himself. Who needs a human woman when you can take night-time city skyline shots in South Perth with a Tesla in view? Hope the public toilets are still open because he’ll need a ginormous wank after it.