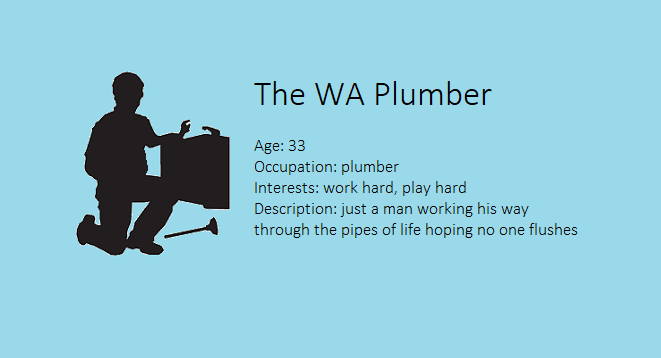 Gav starts his day by power-yaking into his ensuite toilet at 5:30 am. After he purges his body of yesterday’s knock off drinks he walks to his garage to enjoy a hearty breakfast consisting of a cigarette and a large can of Mother while looking at his jet skis.

Every day is sunny when you’re making plumbing money. He fires up his Triton and picks up his apprentice on the way to site. When they arrive, Gav tells the boy to dig through the pile of crap at his feet to find his Gatorade billie, “feeling rough as guts mate, you get to work digging while I pull a few cones”.

An hour or two later, Gav emerges feeling as fresh as a man who just knocked one out in his driver’s seat can be. He spots his apprentice’s work and treats him to a little public humiliation, “what do you call that ya farken muppet, seen deeper holes in ya mum’s bedroom ya little flog”.

Gav checks his G-Shock and is delighted it’s time for smoko. They head to Subway, “yeh nah, double meatball sub with ranch, southwest sauce, no salad and like 8 of them cookie things, ta love”.

His apprentice goes for a 6inch ham & salad. Gav hovers right at the kid’s ear, “do you want a farken tamponn with ya feed, son?”

He ruthlessly shoves his sandwich down his gullet while forcing his apprentice to view humorous Xrated videos on his phone. “Check that out mate, he fits his whole head in”. While the boy is distracted by the horrific imagery, Gav cocksa leg, rips arse and cupcakes his apprentice in the middle of the Subway.

Back on site, Gav finds himself in a blue with another tradie who called him an overpriced toilet repairman. Some unpleasantries are exchanged before Gav has a pair of tubing cutters in his hand threatening to go Lorena Bobbitt on his adversary.

Later in the day, Gav hands his apprentice a pen, “go let that turd’s tyres down would ya boy, the Navara over there”. His apprentice dutifully obeys. As he is walking off, Gav yells at, “feel free to put a brick through the window too, ha ha”. No one calls Gav a toilet repairman and lives to enjoy a drive home at the end of the day.

It’s finally 3 pm and Gavin’s apprentice is looking forward to getting home and napping. “Yehhh nahhh mate, need a drinking buddy”. Gavin has half a carton of Emu on ice in his car.

He parks at the South Perth foreshore and the pair drink ice-cold beers while gazing at the river. Gavin grows increasingly emotional with every beer. “Can you believe she isn’t responding to me messages after going out last fridee? Said I came to the pub smelling like crap, like actual crap”.

In Gav’s toey haste, he had decided to skip going home for a shower before meeting his date. In hindsight, this probably wasn’t the right play. His apprentice nods politely as Gav continues spilling his guts.

On the drive home, Gav is struck but a bolt of inspiration, “reckon I should send her a pic of me meat plunger while I’m doing a hundy on the Freeway? Will that fix things?” Probably not, Gav.

Morley To Bring Back WA Salvage Over Concerns Suburb Is Becoming...