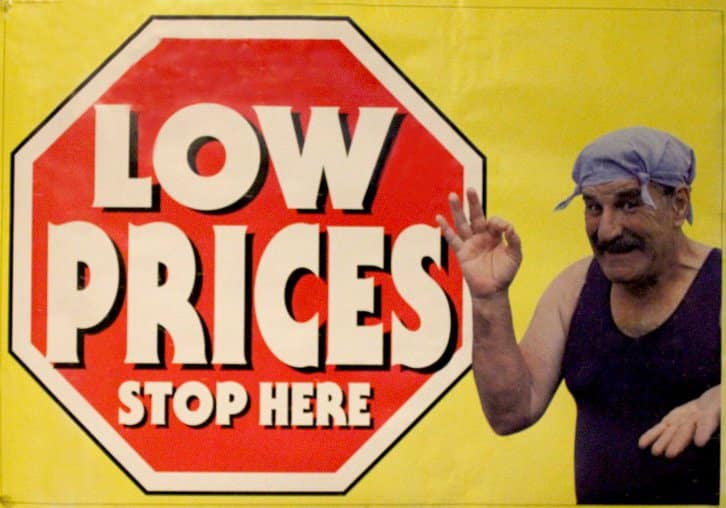 WA Salvage was essentially a cross between a Bunnings, a Red Dot and the Royal Show. Not because there were rides but because there was always sawdust all over the floor and the human cattle-clientele always stunk like barnyard animals.

Each weekend, a who’s who of discount bin raiders and wholesale whales drifted to this cathedral of savings to scavenge the juicy carrion of bargains. It wasn’t just the prices that impressed it was the range.

You could almost buy anything – from garden stuff, building supplies to novelty delights. It had you covered whether you were doing your Chrissy shop or trying to construct a fully operational ice lab.

A person could truly lose themselves in the abyss of warehouse shopping. To help prevent this WA Salvage enlisted the help of the charismatic frontman, Luigi.

Now Luigi came off as the ding bloke next door who would bury his money because fuckada banks. He resonated with the population because most of us have lived next door to a bloke like him once in our lives.

He turned the boring world of WA retail advertisement into performance art worthy of an Oscar. Shopping didn’t feel the same unless you had a bloke with a hankie on his head screaming about a liquidation sale where you will NEVER find a better price on some PVC soak wells or a wheelbarrow.

Naturally, he’d finish every yelling segment with a catchphrase – “we’re not fancy but we’re cheap, eh!” or “sava da money!” He was the best high decibel salesman in the game.

Of course, some would argue the Nox Warehouse guy but it was always hard to stomach an old, ethnic man screaming at you to buy woman’s g bangers or Dada jeans.

To the shock of a State, in 2005 WA Salvage announced it was finally liquidating for real. Seems the world just didn’t have room for ol Luigi and co anymore.

However, WA Salvage wasn’t about to just leave the game without cementing their name in WA folklore – by giving everyone in Morley a nice big dose of toxic smoke.

It will come as no surprise that Morley was the home to one of the last WA Salvage stores and on one fateful day in March 2006, she lit up.

Perhaps it was a real commitment to the concept of a fire sale or maybe smoko gone wrong. Either way, Morley was turned into downtown Baghdad that day. Bunnings Inglewood paid tribute some years later.

The whole operation wrapped up shortly after and the State was left wondering where it was going to sava da money now.

They say you can still see the sparkle in a middle-aged, discovered dad’s eye when you mention WA Salvage – the convenience and savings made it his WA Salvation and the system can never take that away from him.